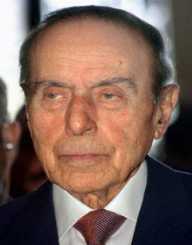 Heydar Aliyev was the third president of Azerbaijan. He was also the leader of Soviet Azerbaijan.

Heydar Aliyev was born on 10th of May 1923 in the Nakhichevan region of Azerbaijan. His alternative full name includes Heydar Alirza oghlu Aliyev or Geidar Ali Reza only Aliev. Born to parents Alireza Aliyev and Izzat Aliyeva, his father Alirza was a railway worker.

The year after, Heydar attended the Azerbaijan Industrial Institute, graduating from architecture in 1941.

Heydar Aliyev went to the Ministry of State Security Academy in Leningrad, graduating in 1944. From 1949 and 1950, he studied at the USSR MGB Officer Corps Qualifications-Raising School, and he also graduated from Baku State University, with a degree in history in 1957.

Heydar Aliyev married Zarifa Aliyeva in 1948; she was the daughter of Aziz Aliyev, a disgraced member of Supreme Soviet of the USSR. They had two children: Sevil and Ilham. Zarifa died of cancer in 1985.

Heydar Aliyev gain quickly in rank, and he was a deputy chairman in the new KGB in 1964, and then a chairman in 1967.

Heydar was elected to become the first secretary of the Central Committee of the Committee of Communist Party of Azerbaijan; his first policies were to reduce corruption. In 1975, there were five people were sentenced to death for gross corruption after the reform.

The country enjoyed moderately good economic growth. For his efforts, he became a member of Political Bureau of the Central Committee of the Communist Party of Soviet Union in December 1982.

Heydar Aliyev was appointed First Deputy Chairman of the Cabinet of Ministers of the USSR, and he was responsible for transportation and social services.

In 1987, amidst opposing Soviet leader Mikhail Gorbachev’s reforms, Heydar was stood down when allegations of corruption were made against him. Heydar Aliyev lived in Moscow until 1990, when he appeared in the Permanent Mission of Azerbaijan SSR in Moscow, denouncing the Soviet reassertion of control in Baku.

The military action had resulted in a violent event, almost set off the Nagorno-Karabakh War. Heydar Aliyev officially resigned from the Communist Party of the Soviet Union and moved back to Nakhchivan.

After a few tumultuous years, the President Incumbent Abulfaz Elchibey went into internal exile. A presidential election was held in October, Heydar Aliyev became the third President of Azerbaijan in October 1993. He was re-elected in 1998.

Heydar Aliyev had a major heart bypass operation in Cleveland Clinic, the United States in 1999. Later he also had prostate surgery and hernia operation; his health continued to fail. Despite his intention to run for president again, he suffered a collapse during a speech on live television in 2003.

Heydar Aliyev appointed his son Ilham as his party’s sole presidential candidate when he stood down as president in October 2003.

President Heydar Aliyev passed away in Cleveland Clinic on 12th December 2003. He was buried at the Fakhri Khiyaban (The Alley of Honor) cemetery in Baku.

Heydar Aliyev was given the Yaroslav Mudry Order "for outstanding contribution to the development of cooperation between Ukraine and the Republic of Azerbaijan and strengthening friendship between the Ukrainian and Azeri people" in 1997. It is Ukraine’s Highest Award.

In 2003, he was given The Order of St. Andrew, the highest order of honor of the Russian Empire. Heydar Aliyev was recognized for his great personal contribution to  strengthening friendship and cooperation between Russia and Azerbaijan