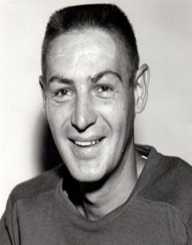 Terry Sawchuk was a Canadian ice hockey player with an outstanding winning record in the National Hockey League. His goal tendering skills kept his teams in many tournaments. Almost five decades since his death, he is still idolized as the best goal tendering material of all time.

Born on December 28, 1929, in Winnipeg Manitoba, Terry Sawchuk was born in a family of five siblings. His parents were immigrants from Ukraine. At birth, he was named Terence Gordon Sawchuk. His parents were Louis and Anne Sawchuk. Terry Sawchuk was brought up in the Ukrainian section of Winnipeg. He attended high school in Galt but dropped out in the 11th grade. Having left school, he decided to concentrate on playing hockey. Sawchuk was a gifted athlete. He played rugby, baseball, and hockey. It was ice hockey that captivated him most.

Apart from discovering his passion early in life, Sawchuk had a stressful beginning. Two of his brothers died while he was a child. The first brother died of scarlet fever, while the firstborn brother died of cardiac arrest. The pain of losing his siblings early in life pained him for years.

Sawchuk had a deformity in his right hand. He got injured playing rugby but never sought medical attention. The elbow injury made the arm slightly shorter than the left.

Terry Sawchuk got his professional contract in 1947. The Detroit Red Wings signed him as a goaltender. He won the Rookie of the Year Award in his debut year. He rose through the ranks earning a permanent spot as the number one goaltender. The rigorous play schedule took a toll on him. He played daily since he had no reserve person to relieve him. This aggravated his injuries even further.

After eight years at the Detroit Wings camp, Sawchuk went to Boston Bruins in the summer of 1955. His injuries continued, and after two years, he announced his retirement aged 27 years. He cited extreme tension and emotional fatigue.

Terry Sawchuk returned to Detroit but was never a regular player. He was released on a free transfer in 1964. The Maple Leafs took him. He won few trophies with Maple Leafs and let for the Los Angeles Kings. Sawchuk went back to Detroit after one season. The New York Rangers sought his services, and he played for them in the 1970 season.

Terry Sawchuk was married to Patricia Morey in August 1953. The couple had seven children. The marriage ended by his wife successfully getting a divorce in 1969.

Sawchuk suffered from alcoholism and depression. Throughout his marriage, he fought his wife over the issue. After the divorce, he went to live with his friend Ron Stewart. He continued with his condition without seeking medical help.

Terry Sawchuk died on May 31, 1970. His death was caused by several internal injuries. It is reported that the two housemates fought and Stewart inflicted the injuries. In a later report to the police, Sawchuk absolved Stewart of any blame in the incident. The police however prosecuted Stewart but did not get a conviction. The jury ruled out any ill motive in the occurrence. To the court, the injuries occurred from an innocent accident.

A funeral memorial service was held in the US and Canada. Sawchuk was not buried in his native Winnipeg in Canada. His remains were interred in Mount Hope Cemetery in the Michigan state of the USA.

Terry Sawchuk was inducted in the American ice hockey Hall of Fame in 1971. Four years later in 1975, the Canadians inducted him in their Hall of Fame. In his playing days, he won the NHL Vizena Trophy three times as a goaltender. This happened in 1952, 1953 and 1955. The fourth time he shared the trophy with John Bower in 1965.

He won a record 501 games with different teams. Sawchuk had a long-standing record of playing in 447 seasons. The record was broken in 2000, thirty solid years after Sawchuk retired from playing the game. In all, he had 11 All-Star appearances. He was selected as Manitoba’s player of the century. At the Manitoba’s Hall of Fame, Sawchuk’s jersey hangs proudly.

The latest achievement came in 2017. He was named as part of the 100 greatest ice hockey players in the history of the game.