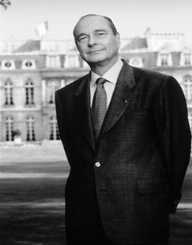 Jacques Chirac as he is commonly known was christened Jacques Rene Chirac at birth in the year 1932. At the time of his birth, his father worked as manager of a bank while his mother was devoted to raising the kids. His parents also led a devout Roman Catholic life. In his early years, Jacques Chirac was at the Lycee Carnot for elementary education but moved on to Lycee Louis-le-Grand later on. At the dawn of the 1950’s, Chirac was ready for working life as a public servant. He got trained at the Paris Institute of Political Science and graduated in 1953.

Jacques Chirac also had a brief stint at Harvard before attending the elite Ecole National d'Administration. By 1954, Jacques Chirac was conscripted into the French National Army during the war against Algerian resistance. He cited General de Gaulle as his inspiration for political service.

Jacques Chirac started out as an assistant to PM, Georges Pompidou in the 1960s and he cut his teeth here before progressing as a junior minister in 1967. He went under the next president at the time, Valery Giscard d'Estaing to become the Prime Minister. He served for two years and resigned. Jacques went on to form his party in 1976, and it was named Rally for the Republic or the RPR. As the years progressed, Chirac, fused the party into the Union for a Popular Movement along with other interest groups.

Jacques Chirac served as the Parisian mayor from the year 1977 till 1986 when he became the PM again. He left the role and went back in 1988 to continue his stint as mayor of Paris. When President Mitterrand died in 1995, he saw an opening to govern as president and ran for the position and was elected this time.

Jacques Chirac warded off Jean-Marie Le Pen’s run to the political height in 2002 and shortly after his success; he was almost assassinated. This attempt on his life on Bastille Day did little to rattle him as he focused on his agenda of political reforms. Jacques Chirac succeeded in reducing the tenure of the president to five years by working with parliament to have a harmonized term. He did not bother that it was going to affect his term of office. In a sense, Chirac held himself out as a statesman who was more interested in the national good than personal gain.

Jacques Chirac opposed the 2003 Iraq invasion by the US and allies. His consistent opposition to the invasion was notable as he insisted that there should get a UN Security Council approval for the move. Chirac completed the public museum of tribal art, Musee du Quai Branly in the year 2006 and did not attempt to bring any grandiose project other than crucial policy changes and reforms.

Jacques Chirac confessed publicly that he had a keen eye for women in the year 2007 before he completed his term. He also veered into controversial issues when he labeled the Brits as people who cannot be trusted since they have such a terrible cuisine. Although Chirac was not a master chef, his views on the culinary slant of the Finns were also reported. He labeled Finnish cuisine as the worst there is in the whole of Europe.

Jacques Chirac's controversies for the space of time he served as mayor of Paris mayor was mostly about using the city’s funds for his party. Jacques Chirac's family holidays were often paid for in cash and while this raised eyebrows, it was the one thousand dollars a week spent on family groceries that made headlines. Chirac's run as president was victorious in 1999, and this gave him immunity from any legal challenge to the allegations against him.

Chirac also courted controversy when he pushed his legal handler into office as the Chief Prosecutor for the city of Paris. The opposition viewed this as a way to stymie the corruption probe against him. While his other team players like the PM, Alain Juppe was docked for questionable and illegal funds diversions for the party, he was off the hook. Other allies of Chirac were handed a jail sentence, but his office immunity shielded him

Jacques Chirac was nicknamed Chameleon Bonaparte and was also called the weatherman. Jacques Chirac is one of the longest public servants in the history of France. His stay in the public office from that of the mayor to the prime minister and President stretched over lengthy decades till he turned 79 years old. Chirac was tried and convicted of embezzling public funds and was also charged with breach of trust and conflict of interest. He never pleaded guilty to these charges but denied them. On account of age, he stayed away from trials when his defense team came up with a medical condition diagnosis of memory lapse. His lawyers represented him throughout his the court proceedings.

Jacques Chirac's image across France was legendary, and no politician trumpeted or aligned with the court trial of this political legend of France. This perhaps indicates the popular sway of sentiments by the French public to the service and life of Jacques Chirac.

When the memoirs of Jacques Chirac were completed, it was released in volumes. The first was titled -Memoires: Chaque Pas Doit Etre un But. This translates to “ Each Step Should be a Goal” in English parlance. This hit the bookshelves in November 2009, and his autobiography came next in November 2012. The book was titled My Life in Politics

Jacques Chirac got married to Bernadette Chodron de Courcel in 1956, and the union gave rise to three children.