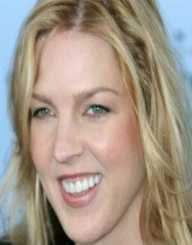 Diana Jean Krall OC, OBC, is an award-winning Canadian jazz singer and pianist best known for her rare contralto vocals. Born on November 16, 1964, she had a career breakthrough with the album All for You: A Dedication to the Nat King Cole Trio in 1996. She has since released several top-ratedalbums including When I Look in Your Eyes, which won her a Grammy Award in 1999.

Diana Krall has sold over 6 million album copies in the US and more than 15 million internationally. She has eight albums chatting at the top of the Billboard Jazz Albums, making her the first jazz singer to achieve that feat. She has a total of eight Juno Awards and three Grammies among others.

Diana Krall was born on November 16, 1964, in Nanaimo, British Columbia in Canada. She was born to Adella A. and Stephen James “Jim” Krall. Her mother was an elementary school teacher and her father an accountant.

Both parents were into music. Stephen played the piano and Adella was a singer in a community choir. Young Krall picked this interest, and at the age of four, she started learning how to play the piano. While in high school, she joined a student jazz group. Krall started playing in local restaurants when she was 15 years.

After high school, she won a scholarship to Berklee College of Music in Boston, from 1981 to 1983. She later moved to Los Angeles to play jazz.

In 1993, Diana Krall returned to Canada to release her debut album, Stepping Out, featuring Jeff Hamilton and John Clayton. The album attracted the attention of producer Tommy Li Puma who took an interest in Krall’s talent.

He produced her second album Only Trust Your Heart in 1995. She followed with the third and breakthrough album All for You: A Dedication to the Nat King Cole Trio in 1996. The album was very successful chatting on the Billboard jazz chart for 70 weeks and earned a nomination for a Grammy.

Diana Krall released the album When I Look in Your Eyes in 1999, with orchestral arrangement by Johnny Mandel. The album won Krall her first Grammy. In 2001, she released The Look of Love, reaching top ten on the Billboard 200 and achieved platinum status. Krall’s debut live record, Diana Krall: Live in Paris was recorded at a concert at Paris Olympia. It featured covers of Joni Mitchell’s “A Case of You,” and Billy Joel’s "Just The Way You Are."

Diana Krall's husband, Costello encouraged her to write her songs after they married. He, therefore, became her lyricist and the first of such collaboration was the album The Girl in the Other Room in 2004. The album was a very successful rising to the top five in the UK and chatted on the Australian top 40 album charts.

That same year, she featured on Ray Charles album Genius Love Company on the song "You Don't Know Me." She released Quiet Night in March 2009. That year, she produced Barbra Streisand's album Love Is the Answer. Her other albums include Glad Rag Doll, 2012,Wallflower, 2015 featuring covers of Elton John and Bernie Taupin,("Sorry Seems to Be the Hardest Word"), and ("I'm Not in Love"), two songs of the Eagles, Neil Finn("Don't Dream It's Over"), and Gilbert O'Sullivan ("Alone Again (Naturally)").

Diana Krall received the Order of British Columbia in 2000 and made an Officer of the Order of Canada in 2005. The University of Victoria awarded her an honorary Ph.D. in Fine Arts in 2003. She was inducted into the Canada Walk of Fame in 2004.