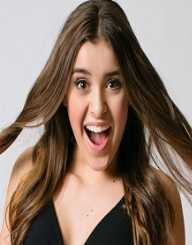 Kalani Brooke Hilliker was born on September 23, 2000. She is an American dancer and a social media personality. She is sixteen years of age. She started dancing when she was only two years old. Currently, she is considered one of the most famous dancers in the United States. Her parents are very supportive of her career. They help her nature her career and present opportunities for her to better herself. She is a role model for many teenagers. She has over three million followers on Instagram, more than two hundred and fifty thousand followers on Twitter and more than one hundred thousand likes of Facebook. She is among the most followed celebrities on social media.

Kalani Brooke Hilliker was born on September 23, 2000, in Phoenix, Arizona, United States of America. She was born to Kira Girard and Matthew Hilliker. She has two siblings, Jett Newman and Jax Hilliker.

Kalani Brooke Hilliker started dancing when she was only two years old. She made her debut in dancing at a recital which portrayed her as a performer. At the age of five, she attended and trained at Club Dance, Arizona. At the age of ten, she trained at the Master Ballet Academy. She performed in dancing and talent shows that were held in the United States. She competed in the United States Dance Circuit among other regional and national competitions.

In 2011, Kalani Brooke Hilliker entered Disney Channel’s ‘Make Your Mark: Ultimate Dance Off’ contest. She joined the show with some of her friends to win the prize which was featured on the television show ‘Shake It Up.’ Her group was known as ‘AKSquared.’ Her group won the competition and was featured in the episode ‘Camp It Up.’ In 2013, she participated in the second season of ‘Abby’s Ultimate Dance Competition.’ She became Abby Miller's favourite dancer and the audiences’ favourite as well. She reached the finals in the show but was eliminated in the final weeks.

Abby later invited Kalani Brooke Hilliker and her mother to join Abby Lee Dance Company in the ‘Dance Moms’ season four. They starred in the show until the middle of the season’s finale. They later returned to Arizona. She has also appeared in the fifth season of ‘Junior Elite Competition Team.’ She has appeared as well in ‘America’s Got Talent’ and ‘The View.’ She has also starred in television shows such as ‘Swiped,’ ‘Breaking Brooklyn’ and ‘Bunheads.’ She also has music videos such as ‘Em Out’ and ‘My Name’ among others.

Kalani Brooke Hilliker aspires to be a backup dancer to Beyonce or Katy Perry. She also loves Drake, Rihanna, and Ariana Grande. If she were not a dancer, she would have been a soccer player since soccer in a club soccer team when she was young.