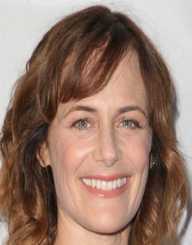 Sarah Clarke was born on February 16, 1972. She is an American actress. She is also known as Sarah Berkeley and Sarah Lively. She is renowned due to her role in ‘24’ as Nina Myers. She is currently Forty-six years of age.

She later became Kappa Alpha Theta sorority’s member. In 1990, she became a member of the Beta Chapter. She later underwent her senior year studies in Bologna, Italy. She later pursued architectural photography in the United States. She after that studied acting in various places including; Axis Theatre Company, The Willow Cabin Theatre Company, and Circle in the Square Theatre School.

In 1999, Sarah Clarke appeared in a Volkswagen commercial which sparked her career. In 2000, she appeared in films such as, ‘Bedroom Night,’ ‘Pas de deux,’ ‘All About George’ all of which were short films.

She later won an award at the Brooklyn Film Festival over her tremendous performance in ‘Pas de deux.’ She also appeared in ‘Sex and the City’ which was a television show.  In 2001, she appeared in ‘The Accident’ as Reeny.

Sarah Clarke was honored with an honorary Performance Award at Brooklyn Film Festival in the best performance category following the ‘Pas de deux’ film. She later won the Golden Satellite award for emerging the best actress in ‘24’ film.

In 2002, Sarah Clarke got married to Xander Berkeley, an actor with whom she has two children. She is currently Forty- six years old.