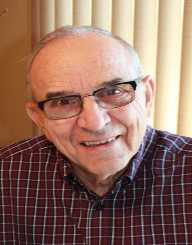 Bernard Joseph McLaughlin was an American Bishop of the Roman Catholic Church. Born on November 19, 1912, he was ordained a priest in St. John Lateran Basilica, Rome in 1935 after his theological study. He started his work at Buffalo holding several positions in that diocese.

The family later moved to Visitation Parish in Buffalo, New York and that was where McLaughlin started his education in a parish school. He continued his education at the Preparatory Seminary in the Diocese of Buffalo in 1925, as a member of the first graduation batch. Five years after his graduation, he left Buffalo to enrol at the Urban College for the Propagation of the Faith in Rome Italy.

On December 21, 1935, Bernard Joseph McLaughlin was officially ordained a priest in St. John Lateran Basilica, Rome. After spending six months in Rome, he returned to Buffalo. He became an as an assistant at St. Joseph New Cathedral on August 14, 1936, remaining there until 1946. He was then appointed the secretary of the diocesan Tribunal.

On December 28, 1968, Bernard Joseph McLaughlin was appointed an Auxiliary Bishop of Buffalo. On January 6, 1969, he received his episcopal consecration from Pope Paul VI to become the first time a diocesan priest from Buffalo had been appointed a bishop by a pope.

He was given the name Titular Bishop of Mottola. McLaughlin served as an advocate of the diocesan Tribunal and professor of Labor Ethics at the Diocesan Labor Management College. He also founded several parish Labor schools. McLaughlin also became the chaplain of the Catholic Guild for the Blind and was a secretary of the Diocesan Synod.

Bernard Joseph McLaughlin received several honors from the Vatican for his pastoral work. Pope Pius XII made him a Private Chamberlain with the title of Very Reverend Monsignor on April 6, 1950. After three years of service, he was made the Domestic Prelate with the title of Right Reverend Monsignor. Pope Paul made McLaughlin a Prothonotary Apostolic on December 4, 1967.

Bernard Joseph McLaughlin served as a member of the board of Diocesan Consultors and a vicar general. He was made a Knight of the Holy Sepulchre at the St. Patrick’s Cathedral in New York City by Archbishop Terence Cooke on September 14, 1968. McLaughlin retired on January 15, 1988, by submitting his letter of retirement to the Pope.

After his retirement, Bernard Joseph McLaughlin was made an Auxiliary Bishop Emeritus of Buffalo. McLaughlin died on January 5, 2015, at age 102 at Tonawanda, New York.