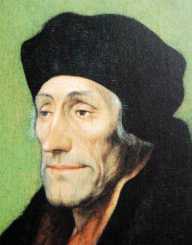 Renaissance scholar Desiderius Erasmus was born on the 27 October 1466 in Rotterdam, Holland. His parents were Roger Gerard, who was a priest, and Margaret, the daughter of a physician. Erasmus had one sibling, an older brother Peter.

After they had been orphaned by the deaths of both their parents in the plague of 1483, Desiderius Erasmus and his brother both were sent to school at in Hertogenbosch run by the Brethren of the Common Life. It was around this time that Erasmus first started learning Greek.

Desiderius Erasmus entered a monastery and remained there between 1485-1492. He conducted classical studies that were discouraged at the monastery. Erasmus was ordained in 1492, and in 1493 he left the monastery took up a position with Henry of Bergen, the Bishop of Cambrai. Against the Barbarians was published in 1493.

Desiderius Erasmus was sent by the bishop to study theology at the University of Paris in 1495, and where he also did classical studies and taught (1497-1500). After 1500, Erasmus became an independent scholar. Although he was ordained as a Catholic priest, he received a temporary dispensation so that he could work with Bishop of Cambrai. Later Pope Leo X made the exemption permanent.

When Erasmus visited England at the invitation of William Blount, Lord Mountjoy in 1498 he met Thomas More and John Colet. He also met the future monarch of England, Prince Henry who would go on to be crowned Henry VIII.

Erasmus returned home from his visit to England convinced that the Latin version of St Paul’s Epistles had to be translated from Greek by an expert and set about mastering the language. He also obtained a copy of the writings of Origen, a Greek Christian writer who focused on the allegorical side of scriptural interpretation based on Platonic philosophy.

In the early 1500s, Erasmus was living in Leuven and studying St Paul and Origen in Greek.

Enchiridion and On Moral Duties were both published in 1501. In 1503 he produced Enchiridion militis Christiani, the Handbook of a Christian Knight. By 1505 he had completed Valia Adnotationes. During 1506 Erasmus was in Italy where he worked part-time at the printing house of Aldus Manutius doing proofreading. He became a Doctor of Divinity at Turin University in 1506. In 1507 he was in Siena where he met the future Pope Leo X.

The satire The Praise of Folie came out 1509 and was a plea for a return to a simplified form of Christianity. He dedicated the work to Thomas More.

Desiderius Erasmus visited England on four occasions, and one trip taught at Cambridge University (1510-1515). He also spent time in Switzerland, Germany, Italy, and France. He was sympathetic towards the Protestant Reformation stating his position in On the Freedom of the Will. In 1516 his New Testament was published. The year 1517 marked the start of the Reformation. Around this time Erasmus started corresponding with Martin Luther. Between 1521 and 1529 Erasmus was living in Basel. Erasmus’s Colloquies and The Free Will were both published in 1524.

Desiderius Erasmus dies in Basel, Switzerland on the 12 July 1536.