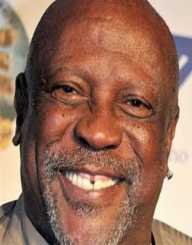 American actor Louis Gossett Jr. was born on the 27 May 1936 to Louis Gossett and Hellen Wray. He was born and raised in Brooklyn, New York where his father worked as a porter, and his mother was a nurse.

Louis Gossett Jr graduated from Abraham Lincoln High School, New York (1954) and enrolled at New York University. During his high school years, aged 17, he made his stage debut in a school production of You Can’t Take It With You.

In 1953, Louis Gossett Jr auditioned for and won a role on Broadway. He appeared as Spencer Scott in Take A Giant Step which turned out to be a hit with drama critics. He also appeared on Broadway in A Raisin in the Sun (1959).

In the 1980s, Gossett was in Sadat (1983) a miniseries about the life of the assassinated Egyptian President Anwar Sadat; the television series The Powers of Matthew Star (1982-1983) and playing the drill instructor in the film An Officer and a Gentleman (1982).

Other roles include Colonel Chappy Sinclair in Iron Eagle (1986), he played a boxer down on his luck in Diggstown (1991), a headmaster in Toy Soldiers (1991), The Josephine Baker Story (1991), U.S. President Gerald Fitzhugh in Left Behind: World at War (2005) and Detective Haven in Boiling Pot (2014). He also appeared in the lead role in Stargate SG-1.

In 1983, Louis Gossett Jr won an Academy Award for Best Supporting Actor for his work in An Officer and a Gentleman (1982). He made cinematic history by becoming the first African-American male to win the best-supporting-actor Oscar. He won the 1970 Los Angeles Drama Critics Circle Award for Distinguished Performance for Murderous Angels. In 1977, he won an Emmy Award for his performance in the miniseries Roots.

During 2010, Louis Gossett Jr was diagnosed with early prostate cancer and successfully treated.

Louis Gossett Jr's first wife was Hattie Gossett. After the marriage was annulled, he married Christina Mangosing in 1973. They had one child together, a son Satie (b.1974) before they divorced in 1975. In 1987, he then married Cyndi James-Reese, and they adopted a child, a boy Sharron (b.1977). James-Reese and Gossett divorced in 1992.