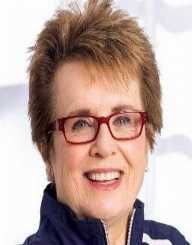 Billie Jean King (née Moffitt) was born 22 November 1943 in Long Beach, California. She was the older of Willard and Betty Moffitt`s two children. Her father was a firefighter and her mother a housewife and a receptionist at a medical center. Both Billie and her younger brother Randy excelled at sport. (Randy was later to become a professional baseball player). Initially, her favorite sport was softball.

Billie Jean started showing an interest in tennis at age 11. She began saving her pocket money to buy her first racket. A young girl from a working-class family, she soon found herself excelling at a country club sport. She won her first championship in a tournament in southern California at age 14. At age 15, she began receiving coaching from the famous tennis player Alice Marble.

Billie Jean attended the Long Beach Polytechnic High School. After graduating, she went on to study at the California State University LA. She graduated in 1964. Whilst attending university, she worked as a tennis coach to earn some money. She also continued playing in tournaments, with mixed results. Finally, she realized she would have to practice harder if she wanted success. She began to train exhaustively, concentrating on honing her basics.

In 1961, King shot to fame when she competed for the first time at Wimbledon. Though she lost the women's singles, she teamed with Karen Hantze to win the doubles title. She won her first Wimbledon singles tournament in 1966, and her second in 1967. She also won the US Open singles at Forest Hills the same year.

In 1968, King won both the singles and the doubles title at Wimbledon. Now the world's No. 1 female tennis player, she decided to become a professional.

1972 was to be King`s year of triumph. She won the women`s singles at Wimbledon, as well as the French open and the US open. Sports Magazine dubbed her “Tennis Player of the Year” and Sports Illustrated Magazine “Sportswoman of the Year”. She missed some matches at the start of 1973 due to a wrist injury. Despite this, she still won six consecutive tournaments and her fifth Wimbledon singles title. However, the fact that tennis was largely geared towards men had long disturbed her. Women's prize money did not match that of men. The young star with a working class background also resented the “country club” attitude of the game.

Battle Of The Sexes

In 1973, King led a group of female tennis players in a push for equality. They formed the Women's Tennis Association, threatening to boycott the U.S. Open if the inequality were not addressed. A major drug company made a donation towards the women's prize money. The U.S. Open became the first tournament offering equal prizes to men and women. This drew the attention of chauvinist ex-tennis star Bobby Riggs. After easily defeating multi-times champion Margaret Court in May, he challenged Billie Jean King to a match. King defeated him in straight sets in front of 50 million viewers. She later said that it would have ruined all the women`s self-esteem if she had lost.

Billie Jean Moffitt married former college friend Larry King in 1965. He was an attorney and also played tennis. In the years they were married, he was to help Billie Jean greatly in her fight against inequality. In 1971, they together formed the“Virginia Slims” circuit for women. In 1973, he also helped form “World Team Tennis” (a mixed gender league). Billie Jean had an abortion in 1971 which was made public. Larry King had spilled the information to “Ms” magazine. He quoted Billie Jean as saying that their marriage was not stable enough for a child.

Billie Jean discovered she was gay at age 25. By this time, she had already married Larry. She began a lesbian relationship with her secretary Marilyn Barnett in 1971. After the relationship became public in 1981, Barnett sued King for palimony. Billie Jean wanted to retire from tennis there and then, but could not afford to do so. The lawsuit was expensive, and she lost many contracts because of her lesbianism. Billy Jean and Larry eventually divorced in 1987. She has been with her current partner Ilana Kloss for 30 years.

King announced that she was retiring from singles tennis playing in 1975. However, she resumed again in 1977. She continued playing doubles until 1983 and still played occasional matches until her final retirement in 1990. At present, she is still active in the Women's Sports Association and the Elton John AIDS Foundation. She was also an acting director on the board of the National Aids Foundation. In 2007 she played a judge in “Law and Order”. Her autobiography “Pressure is a Privilege: Lessons I've Learned from Life and the Battle of the Sexes” came out in 2008. She appeared on “Ugly Betty” in 2009. In 2014 she founded the Billie Jean King Leadership Initiative to fight for equal pay for women. King serves on the President’s Council on Fitness, Sports, and Nutrition and the board of the Andy Roddick Foundation

Billie Jean King described tennis as a combination of violent action and total tranquillity. This was equally true of her private life and passions. She was always a champion of equality for women and homosexuals. Elton John’s song, ‘Philadelphia Freedom’ was a tribute to her.

She coached a team called the “Philadelphia Freedoms” as the first woman ever to coach men.

Billie Jean was a natural winner much admired for her tennis playing. Yet her contributions towards equality for female athletes were equally important. These would not be enjoying the privileges they have today, were it not for Billie Jean King.

President Obama thanked Billie Jean for her contributions to the tennis world when she received the Medal of Freedom in 2009. He also said that she had given everyone - including his two daughters - a chance to compete on the court and in life. This is quite true. As Billie Jean said of herself:

“Tennis is a platform, and I fight for everybody”