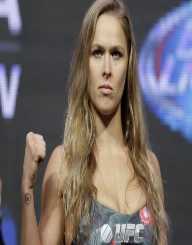 Ronda Rousey was born in the California county of Riverside on the 1st of February 1987. She had a traumatic birth process as the umbilical cord got intertwined around her neck and this impaired her ability to speak coherently. This was only remedied after she turned six years old when she began to communicate coherently. In the four years till her 10th birthday, Ronada was an avid swimmer and took on a tomboy image. She prepared for the Olympics swimming event and made the team pick at the state level. She however took to judo under her mother’s influence and this was a way to reinforce her self-confidence.Ronda eventually made it to the black belt 4th degree cadre in the competitive event.

Ronda Rousey's early years were not pleasant as her dad committed suicide before she turned nine years old. He suffered from a hemophilia-like health ailment that prevents clotting of blood. This was unveiled after he had an accident when sledding and healing were not forthcoming. He had to kill himself after his doctors told him that he could only live for two years. He felt that will be too traumatic for his family and went the easy way. Ronda Rousey's maternal grandfather came from a lineage of immigrants from Trinidad and could boast of mixed heritage of Spanish, English and African ancestry. Her father’s lineage is a mix of Scottish, German, English and Polish descent.

As she grew up, Ronda Rousey emptied herself into judo and became very good at it such that she was acclaimed at age 17. She made it to the Athens Olympics Games as one of the youngest competitors in the judo event. She came out tops at the Budapest World Junior Judo Championships, where she clinched the gold medal. Ronda also won the gold medal at the A-Level tournament that held in Great Britain. At 19 she won the bronze medal at the Junior World Championships and set a U.S record in a decade.

Having grown as a martial arts athlete, there was little Ronda Rousey could do outside of the sport and she had to make do with bartending after the Olympics. However, she chanced on a fight that was ongoing on TV between Gina Carano and Julie Kedzie. This opened her to the possibilities of Mixed Martial Arts. Ronda started off as an amateur MMA in the year 2010, and she was victorious using the armbar submission.Ronda continued on a winning streak after that and set her gaze on the UFC- Ultimate Fighting Championship. Ronda's fighting skills was not in doubt when in 2011, she was on a game show in Japan that was a Judo event. She accepted to fight three men at the same time, and the last man was standing lasted barely 2 minutes.

The president of UFC had proclaimed earlier that there was no chance for female fighters in the UFC but by February 2013, things changed. Ronda was paired against Liz Carmouche, and she overcame her in the first round to clinch the inaugural UFC Women's Bantamweight Championship. Ronda proceeded to win the fastest armlock submission fight in a match-up with Cat Zingano in February 2015 in 14 seconds. Before Ronda's win, the record was held at 16 seconds. As at January 2017, she has lost only two matches in her UFC career.

Ronda Rousey was placed in the 42nd position in the Maxim 2014 Hot 100. She also made the SI 2014 swimsuit issue in May, and she became the second fighter in UFC history that was so honored. She has appeared on several editions of ESPN magazines from 2012 to 2013. She also made the cover of the October 2013.edition of UK's Fighter's Only. Ronda Rousey was named the number 8 on the UFC 2014 Pound-By-Pound rating for fighters worldwide. She proceeded to make her film debut in the year 2014 when she was cast in The Expendables 3. She also appeared in the 2015 film, Furious 7 as well as “Entourage.” She was also a part of the cast of “The Athena Project.”

Ronda was ranked in the year 2015 by Business Insider as the number one on the list of the dominant athletes alive. She beat the likes of Cristiano Ronaldo., Serena Williams, and LeBron James. Ronda Rousey was so impressed with the passion of Brazilians for the UFC game that she deposited her UFC 190 title belt as a souvenir at the Rio De Janeiro Judo School. She said the gesture was to thank the samba-loving people of Brazil for their unmistakable support and passion for the fighting sport.

In May 2015, Ronda Rousey released her autobiography, “My Fight/Your Fight,” which was co-authored with Maria Burns Ortiz, who is also her sister. The book made it to the New York Times bestseller list. Ronda’s recognition continued in 2015 when the Best Female Athlete award was given to her by ESPY. She also won ESPN’S Best Fighter award for the year. She set a record as the first woman to clinch the award in a field that had the likes of boxing great, Floyd Mayweather and Terence Crawford as well as the UFC star, Donald Cerrone.

By the end of the first quarter of 2017, Ronda Rousey got engaged to Tim Browne, who is also a UFC fighter. The pair first met in 2015.