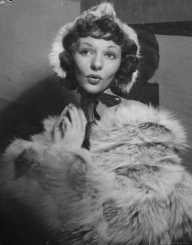 Mary Martin was an American actress who is best known for being the original Maria von Trapp and Nellie Forbush in the stage performances of the Sound of Music and South Pacific.

Mary Martin was born in Weatherford, Texas on 1 December 1913. Martin had a comfortable upbringing. Her father, Preston Martine, was a lawyer and her mother, Juanita Pressley, worked as a violin teacher. Martin’s earliest performances were singing at a bandstand outside the courthouse her father worked in. Martin would mimic songs and scenes she had seen in films. She claimed to have a photographic memory that allowed her to remember the lyrics of every song and the details on every scene. Martin was sent to finishing school in Nashville to complete her education. She deeply disliked being away from home and the school, Ward-Belmont.

Mary Martin was at a loose end about what to do after school, and it was her sister, Geraldine, who suggested she teach dance. Martin first went to California to study at the Franchon and Marco School of the Theatre. Returning to Texas, she was given a studio to run her dance school out of. Martin also sang at the studio on weekends and one day accidentally walked in on an audition. She was given a role in a show in Los Angeles and when she returned her studio had been burnt to the ground. Martin then moved to Hollywood to pursue a career in entertainment. Martin worked tirelessly at auditions and singing in clubs. She was eventually noticed by a producer and landed a role on Broadway.

Her debut was in 1938 in a production of Leave It to Me!.The role made Martin a star from her singing of My Heart Belongs to Daddy she became known nationally. Martin’s also worked on radio. So memorable was her performance that Martin would play herself in the film about Cole Porter, Night and Day. She worked for both CBS and NBC between 1939 and 1945. In 1949, Martin starred in South Pacific. Her performance received rave reviews and earned Martin a Tony Award.

Martin also traveled with the production to London’s West End. Martin’s next major role was in Peter Pan which launched in 1954. In 1959 she opened as the lead in another iconic production, The Sound of Music. Martin enjoyed success again in 1966 with a two-person production with Robert Preston. Martin was passed over many film roles although she disliked filming as she could not feed off the audience during her performances. Her performance in Peter Pan and Annie Get Your Gun were both recorded for television and the recordings still exist. Martin did appear in nine films during her career with Night and Day is the most famous.

Mary Martin married her high school boyfriend, Benjamin Hagman in 1930; Martin was only seventeen at the time. Soon after she had a son with Hagman, Larry. Martin left her family behind when she moved to Hollywood. They divorced in 1936. Martin remarried in 1940. Her second husband was Richard Halliday. Halliday worked as a drama critic and a producer. The couple spent the early 1970s living in Brazil. Their marriage ended when Halliday died in 1973, and they had one child together, Heller. Martin was close friends with actress Janet Gaynor. In 1982, Martin was involved in a car accident and suffered serious injuries. Gaynor was also in the vehicle and would eventually die from complications caused by her injuries. Martin died 3 November 1990 form colorectal cancer.