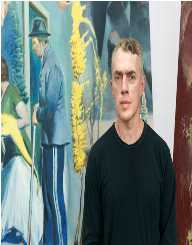 Neo Rauch was born on April 18, 1960, in Leipzig, Germany. His parents died when he was only a baby, so he never got to know them. Because of his parent’s death, he was instead raised by his grandparents.

As a child and teenager, Neo Rauch lived and learned in Aschersleben, Saxon-Anhalt, in Germany. While there, he studied at the Thomas Muntzer Oberschule. After passing his exams from this school, he went onto study painting at the Leipzig Academy of Visual Arts, also known as the Hochschule fur Grafik und Buchkunst Leipzig. While at his school, he studied as a master student under Arno Rink, from 1981 to 1986. He later went on to be a master student until Bernhard Heisig from 1986 to 1990.

After finishing with his education, Neo Rauch decided to stay at Leipzig to work as an assistant professor. He worked until his old professor, Rink. He also worked for another professor, Sighard Gille. He worked for both professors from 1993 until 1998.

In 2005, he returned to Leipzig, this time as a full-time professor instead of just as an assistant professor. He held this post, teaching at the school until 2009.

Neo Rauch is a diverse painter, covering a variety of different artistic styles and topics. He mostly works in the socialist realism painting style. Other artists also work in this style. As a style, the way art is painted can be derived from an earlier style of realism and surrealism. Some famous artists that worked in these styles are Chirico and Dali.

One of Rauch’s first big shows was in 2003/2004 when he produced his first solo show. It would not be in his home country, but instead, it was to take place at the St. Louis Art Museum in Missouri, USA.

Neo Rauch hit a big break in 2004 when he was chosen as a selector (by Lynda Morris) for the EASTinternational group. Over 1000 artists apply to be chosen each year, since the program’s founding in 1991. Being chosen meant that Rauch would be responsible for choosing the winner of the 2004 exhibition. It also meant that Rauch was known to be a great artist who was capable of the job, which only made him all of the more popular. In the year in which he was a selector, Justin Mortimer won the EAST award.

In 2005, he showed his art at the Carnegie Museum of Art at The Carnegie International show.

In 2006, he had another solo art show, this time in Canada at the Musee d'art Contemporain de Montreal.

In 2007, he had another solo show. The show was held in New York City at the Metropolitan Museum of Art. He showed some of his most famous paintings there, as a group called Para.

In 2009, he worked as a co-curator for the Gut Selikum in Neuss art exhibit. The other curator for the event, when translated titled One must hurry if one still wants to see something... was Timm Rautert.

His most recent art show was help in 2013 in Belgium. His art was displayed at The Center for Fine Arts. The collection was named for him, titled Neo Rauch: The Obsession of the Demiurge. In the show, he had various works of art which he had worked on beginning as early as 1993.

All of Neo Rauch’s awards are for his works of art. Some of his most prestigious awards are listed below.

Neo Rauch is married to Rosa Loy, who is also an artist. The couple married in 1985. This couple has no children together and does not seem on planning on changing that.