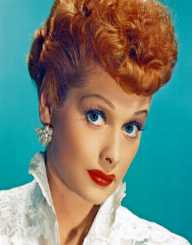 American actress Vivian Vance was born Vivian Jones in Cherryvale, Kansas in July 1909. Her parents were Robert Jones and Euphemia Jones.  Vance had five siblings: four sisters and a brother.

During the 1930s Vance’s family moved to Albuquerque and it as there that she studied drama. She graduated from Independence High School.

Her first stage appearance was at Albuquerque Little Theatre in 1930. With assistance from local theatre fans in Albuquerque, Vivian Vance moved to New York City in 1931 and began to appear in various theatrical programmes and productions. Her first Broadway performance was in the musical comedy Music in the Air (1932). She worked as Ethel Merman in Anything Goes and with Danny Kaye and Eve Arden in Let’s Face It.

Vivian Vance returned to New Mexico in the 1940s because she was suffering from a nervous disorder and after she had recovered, she settled in California. She was performing at the La Jolla Playhouse in The Voice of the Turtle when Desi Arnaz first saw her. Arnaz was casting for an actress to play the role of New York landlady Ethel Mertz in a new sitcom and offered her the role. The series was I Love Lucy and Lucille Ball had the starring role of  Lucy Ricardo. The sitcom premiered in 1951, was successful and aired until 1957.

Lucille Ball revived her character in 1962 in a new series entitled The Lucy Show. Vivian Vance's role in the new series was Vivian, a physically more appealing character than Ethel who had been a frumpy character. As Vance was living on the East Coast, she travelled to California to work on the show and lived with Ball when filming. She became tired of the travel and reduced her role after 1965.  The Lucy Show finished in 1968. Ball then had a sitcom, Here’s Lucy and Vance appeared in that as well (1968-1972) Vance’s final appearance with Ball was in Lucy Calls The President (1977).

Vivian Vance was the first recipient of an Emmy Award for Best Supporting Actress in 1954. She also won three other Emmy Award nominations. Her Emmy Award was donated to the Albuquerque Little Theatre after Vance died.

In 1991, she was given a star on the Hollywood Walk of Fame, and in 2012 she was inducted into the Television Academy Hall of Fame.

Vivian Vance loved cooking and gardening. She was also interested in interior decorating.

Her sister Lou Graham published a book entitled Viv’s Scrapbook with family photographs and newspaper clippings of her life and career.

Illness marred Vance's final years. She had breast cancer, then a stroke and died of bone cancer in August 1979.