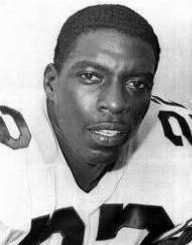 Bob Hayes was born on December 20th, in 1942. He was an Olympic sprinter playing in the NFL. He played for the Dallas Cowboys team. Later, he earned himself a spot at the Hall of Fame right after Jim Thorpe had been listed.

Robert Lee Hayes alias Bob Hayes was born on December 20th, in 1942. His place of birth was in Jacksonville, Florida.

Bob Hayes enrolled with Mathew Gilbert High School located in Jacksonville for his early education. During this period, he played as a backup halfback.

Bob Hayes earned a football related scholarship from Florida A&M University. Here, he performed well in track & field. Hayes earned credits more so in 100-meter competitions as he never lost in any of the races he contested in.

In the early 1960s, Hayes earned a name for himself after breaking records in the 100-yard dash. He left a mark that took about eleven years to be broken. Ivory Crockett later came to break his 100-yard dash record.

In 1964, Bob Hayes contested as a sprinter in the Summer Olympics hosted in Tokyo. During this time, he earned immense recognition after bagging home a gold medal in the relay race. He set a world record of 39.06 seconds.

Still, in the same year, Hayes was drafted by the Dallas Cowboys. The Cowboys team took advantage of the fact that he would perform well as a wide receiver. His first two seasons revealed his exceptional skills as he excelled well.

Bob Hayes passed away on September 18th, in 2002. He died as a result of kidney failure. Hayes was 59 years old at the time of his demise.