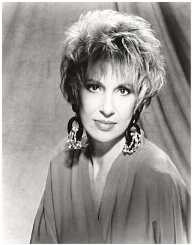 Tammy Wynette is a country music singer who is also a songwriter and guitarist.

Tammy Wynette was born Virginia Wynette Pugh, on May 5, 1942. She was born in Itawamba County, Mississippi. Tammy was the only child of Mildred Faye and William Hollice Pugh. Her father died of a brain tumor when she was nine months old, leaving her mother to work multiple jobs to support the family. When Mildred moved to Birmingham, Alabama to work in a wartime factory job, Tammy lived with her maternal grandparents.

Tammy was working the cotton fields on the family farm at the age of seven. When she was nine, she taught herself to play her father’s instruments: a piano and a guitar. It was her only escape from routine farm life. She attended Tremont High School and first sang publicly in church. Teaming with friend Linda Cayson, Tammy sang gospel tunes at church events, on local radio, and Everly Brothers-style rock'n'roll on local television.

Tammy was a teenage bride, marrying Euple Byrd at the age of seventeen. It ended five years later with a divorce and a custody battle. Tammy studied in a Beauty College, borrowing money from her mother. She supported her three children, but it was not enough when the youngest developed spinal meningitis. Tammy sang for WBRC-TV's ‘Country Boy Eddie’ Show in Birmingham, Alabama, and a 10-day tour, waking up at four in the morning before her hairdressing work.

Moving to Nashville with her three kids in 1966, Tammy Wynette auditioned for producer Billy Sherrill. He signed her into Epic Records, and her first single “Apartment #9” was released later. Bill Sherrill said that she reminded him of Debbie Reynolds in the film Tammy and the Bachelor, so he re-christened her Tammy.

During 1968 and 1969, Tammy Wynette had five number one hits. Stand By Your Man garnered awards and anger from the feminist movement. Tammy had many collaborations with other singers. Most notably was to her third husband, George Jones. She and George continued to perform together professionally, even after their divorce in 1975.

Since 1966, Tammy had released a total of 42 studio albums, and 79 singles on the US country chart. She released fourteen singles and nine compilation albums with George Jones, The 1995 album. One was their last recording together.

Tammy was in soap opera Capitol on March 25, 1986, playing Darlene Stankowski, a hairdresser singer. She also sold her line of jewelry in the 1990s, which she designed herself. Tammy was the voice of the character Tilly Hill on the animated series King of the Hill until her death.

Tammy Wynette was married five times, first to Euple Byrd when she was seventeen. She had three girls with him: Gwendolyn Lee, Jacquelyn Faye and Tina Denise. Tammy married Don Chapel in 1967, but she divorced him a year later to marry George Jones.

Tammy married third husband George Jones in 1969 in Ringgold, Georgia. Together, they had one daughter Tamala Georgette. George also adopted her three kids from her previous marriage. Their divorce was due to Jones’ alcoholism, which was finalized on March 21, 1975. Soon after she married Michael Tomlin, the marriage lasted forty- four days. Three years later, she married long time friend, George Richey.

Since 1970, Tammy Wynette had at least 26 major surgeries; she had appendectomy and hysterectomy after giving birth to Tamala Georgette. She almost died of inflammation of the bile duct in 1993; she underwent an intestinal bypass. By then, Tammy was addicted to painkiller medications. In the 1980s, she went to the Betty Ford Centre for drug treatment.

Tammy Wynette died on April 6, 1998, of a blood clot in her lung. In April 1999, her body was exhumed to settle a dispute on how she died. The coroner declared that she died of a cardiac arrhythmia. Tammy was later reinterred in the Woodlawn Cross Mausoleum, at Woodlawn Memorial Park Cemetery, Nashville, Tennessee. In March 2012, her tomb was changed to “Virginia W Richardson,” but two years later it was back to Tammy Wynette.