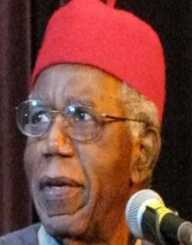 Chinua Achebe is an accomplished writer, teacher, and novelist of Nigerian origins. His first book which is entitled Things Fall Apart, garnered critical acclaims. The book not only became one of the most read novels in African literature but is also widely used as a teaching component at school. In 2007, he was the recipient of the Man Booker International Prize for his literary works as well as The Dorothy and Lillian Gish Prize for his humanitarian activities in 2010.

Chinua Achebe married Christiana Chinwe Okoli in 1961 who bore him children namely Chinelo, Ikechukwu, Chidi, and Nwando. Achebe died at the age of 82 on March 21, 2013, after suffering from a short illness in Boston, Massachusetts.


A Child Born at the Turn of Events

Chinua Achebe was born on November 16, 1930, as Albert Chin?al?m?g? Achebe to Janet and Okafo Achebe in Ogidi, Nigeria. At the time of his birth, the people of Ogidi were already converting to the Protestant Church Mission Society. As a result, the people turned their back from their ancestral beliefs and practiced Christianity instead.

Despite this event, Achebe’s father still respected his ancestors’ traditions and belief system, so the young Achebe still grew up hearing the stories as told from his ancestral roots. After his youngest sister was born, the family relocated to the town of Ogidi where Achebe spent his formative years.

As a child, Chinua Achebe was extraordinarily bright and showed a keen passion towards reading and literature. His teachers were impressed with his reading and comprehension skills. He attended St. Philip’s School in 1936 and got accelerated. Achebe also enrolled and took classes at Dennis Memorial Grammar School located in Onitsha and the Government College situated in Umuahia.

Achebe attended the first university established in Nigeria which is now known as the University of Ibadan, but it was known back then merely as University College. He passed the entrance examinations with flying colors and was granted a major scholarship to study medicine at the university. However, Achebe opted to pursue a degree in writing instead as he wishes to portray the culture and diversity of the African community in a better light in contrast to author Joyce Cary’s portrayal of his people as savages and stupid.

The Father of Modern African Writing

Chinua Achebe made his historic debut as a writer in 1958 when he published Things Fall Apart, his first and most acclaimed novel.  The topic of the book tackles the conflict between the Nigerian tribal culture and the colonization that occurred as executed by the Christian commissaries in Nigeria. The book drew influence from Achebe’s experiences from childhood and the African community. The book was a success which led to other sequels entitled No Longer at Ease which was released in 1960 and Arrow of God in 1964 and the finale entitled A Man of the People which was published in 1966.

He founded the Citadel Press in 1967 alongside Christopher Okigbo which ought to serve books catered for African children. Achebe also served as the director of Heinemann Educational Books Ltd. and Nwankwo-Ifejika Ltd. publishing companies in the early 1970s while teaching in the US.

Besides the Things Fall Apart series, Achebe also published a couple of books targeted for children such as How the Leopard Got its Claws which was released in 1972.

Achebe as an Educator

Besides contributing to the literary industry, Chinua Achebe also served as an educator and lecturer for a number of universities including his alma mater, University of Ibadan, the University of Massachusetts, and the University of Connecticut. He relocated to the United States during the 1990s after suffering from an accident that left him paralyzed from the waist down. Ultimately, he led the rest of his life in a wheelchair but continued to teach at various institutions such as Bard College in NYC before moving to Rhode Island as part of Brown University’s faculty in Providence.