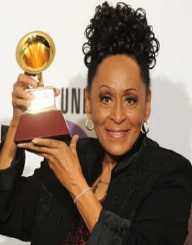 Omara Portuondo is a Cuban musician and dancer of traditional Afro-Cuban Latino music. She is famous for her time as a member of the Buena Vista Social Club.

Omara Portuondo Pelaez was born on October 29, 1930, in Cayo Hueso, Havana. She was born of an Afro Cuban father Bartolo Portuondo and a Spanish Cuban mother Esperanza Pelaez. Her parents were a mismatch to society then. Bartolo was a Negro baseball player, while Esperanza was from a wealthy family of Spanish origin. Omara was one of the four sisters.

Omara joined the dance group Cabaret Tropicana in 1950. She moved to the Havana musical band Orchestra Anacaona as a singer in 1952. In 1953, Omara and her sister Haydee joined others to form the singing formation Cuarteto d’Aida. The quartet toured the US and recorded an album in 1957. In 1958 she recorded her first album Magia Negra, with the label Velvet. Her sister left for the US leaving the quartet. Omara continued with the trio until 1967.

In 1961, the Cuban-American relations soured to the brink of war. The American forces unsuccessfully invaded Cuba. After the Bay of Pigs debacle, the Soviets stationed their nuclear missiles in Cuba. Cuba severed diplomatic relations with the US. Omara returned to Havana, as most of the other Cuban musicians remained in the US.

The rift between the US and Cuba led to a mass exodus of Cuban musicians to the US. Havana became a shell of its former self. In the vacuum, Omara saw an opportunity to rejuvenate the Cuban tradition. She stepped in the gap and made a career. She started singing revolutionary songs to whip the nationalist feelings in Havana. Omara toured the world to promote Cuban music despite the American embargo on Cuba.

She worked with Juanito Marquez and popularized her music. Since America was cordoned, Omara continued to perform in Spanish speaking countries in Latin America. She toured western European countries and was welcomed in socialist Eastern Europe.

Omara had a liking for romantic songs. She did different genres of Havana music. To blend into her romantic world, she chose to play the slow tempo Latin genre called bolero. She believed she had to express the feelings of the words to the heart of the listener. Omara used the bolero to produce memorable songs and performances.

To spread her influence, she did collaborations with other great Cuban musicians. Her soloist vocal blended in the songs of most of the duet performances. She did her most memorable performances with the Cuban elderly musician Compay Segundo. Omara recorded an album with Segundo and went on a tour. She sold over six million copies of the album on the tour.

At the beginning of the 1990s, the old revolutionary wave started disappearing. Havana was populated with the young who were born after the revolution and the Bay of Pigs debacle. Omara and her like were being overtaken by the more vibrant and high tempo Afro-Caribbean music. In 1996, Omara went to record in a Havana studio. She met American Ry Cooder. He was looking for older Cuban musicians to form a band. Omara accepted the offer to join the band.

She was introduced to the other band members by the leader Juan de Marcos Gonzalez. The band named Buena Vista Social club started as a social project to revive the old Cuban music. Omara jump-started her career again at the Buena Vista. In 1999 she recorded the song Silencio. The song became a soundtrack for the film titled Buena Vista Social club. The film was nominated for an Academy Award.

In 2000, she recorded the album Buena Vista Social club Presents Omara Portuondo. She was nominated for a Grammy in the Latino Traditional Tropical category. Omara went on a tour of the US since her exit tour in 1961, after the Cuban Missile Crisis. She held other subsequent US tours after 2000. Omara played to expansive audiences in Mexico and Europe. She became a commercial success after the tours but still preferred performing in Havana. She was baffled by the class society in the US and America, as compared to her Cuba. In the capitalist world, rich celebrities were segregated in their cubicles at any concert. In Havana, Omara saw the audience being relaxed with no celebrity status to anyone.

In 2004 at the age of 74, she toured the Portuguese speaking Brazil. She popularized her album, Flor de Amor. In the album, Omara often picked on her theme song Tabu. In the song, she addressed the stereotypes associated with interracial marriages. Her parents were victims of the negative stereotypes of mixed race marriages.

Omara still performs in Havana and tours the world. She attributes her long career success to her ability to adapt. She sings with the young musicians and is at home with the older generation musicians.