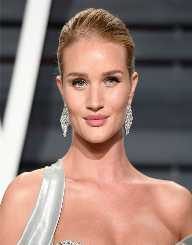 Rosie Alice Huntington-Whiteley is an English actress and model. Born on April 18, 1987, she is also a designer and entrepreneur. Whiteley has worked with several fashion retailers and houses including Mark & Spenser and Victoria’s Secret lingerie brand. She was the face of “Burberry Body” a fragrance by Burberry. Huntington-Whiteley most recent work was with the fashion brand, Paige. Following her success in modeling, Huntington-Whiteley also ventured into acting. She is known for the role of Carley Spencer in Transformers: Dark of the Moon, 2011. In 2015, she played The Splendid Angharad in Mad Max: Fury Road.

In an interview with David Letterman, she revealed having smoked before. She said the last time she publicly smoked was in 2012 but had since quit.

At age 15, while still in school, Huntington-Whiteley did her work experience at the model agency, Profile, in London West End. After graduating in 2003, the agency signed him. She did her first modeling session in Levi’s jeans commercial. Huntington-Whiteley had a career breakthrough in 2004 during a shoot with Teen Vogue in New York City. That same year, she made a debut catwalk alongside Naomi Campbell. During the session, Bruce Weber photographed her for Abercrombie & Fitch.

American lingerie brand, Victoria’s Secret signed her in 2006. Following that she made her debut for the brand at their fashion show in Los Angeles.

Until 2008, Huntington-Whiteley was virtually unknown outside the fashion world. That year, chief creative director Christopher Bailey cast her alongside actor Sam Riley for Burberry’s autumn/winter campaign. She replaced Agyness Deyn. Following that, she had her first British Vogue cover along with Jourdan Dunn and Eden Clark. In 2009, she featured as the face of Karen Millen advertising campaign. She played a woman whose boyfriend forgets Valentine’s Day in a short movie made for Agent Provocateur lingerie. Huntington-Whiteley became a Victoria’s Secret Angel in February 2010. She since began modeling for the company’s Fashion Show in New York City. That year, she did runway for Giles Deacon in Paris and Prada in Milan.

She has featured on covers on several magazines including British Vogue, Elle, GQ UK, Harper’s Bazaar, and LOVE Magazine.

Huntington-Whiteley has walked the runways for several fashion houses including Burberry, Balmain, Givenchy, Louis Vuitton, and Valentino. Others are Michael Kos, Oscar De La Renta, Versace, and Vera Wang among several others.

Aside from modeling, Huntington-Whiteley has also appeared in some films. She made a film debut in Transformer: Dark of the Moon, 2011. She received mixed reviews for her performance. In 2015, she played The Splendid Angharad in Mad Max: Fury Road.

Huntington-Whiteley has been dating actor Jason Statham since 2010. The two engaged in 2016, according to her representative. The couple has a son Jack Oscar Statham born on June 24, 2017.