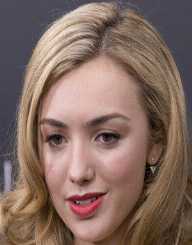 Peyton Rio List is one of the rising talents in the American movie industry. The 19-year-old actress has since her debut strives to achieve greater heights with her prolific acting skills and display of talent. Born on April 6, 1998, she is an American actress and model. She is best known for her role in the Disney comedy series, Jessie where she played Emma Rose and also in the film series Diary of a Wimpy Kid where she plays Holly Hills.

Peyton List has also featured in several films and television episodes. Aside from acting, she modelled for tween magazines and other companies. Her latest movie was in Disney’s The Swap in 2016. Many get confused with the two Peyton Lists’ because both are actresses. However, this List has introduced R. making the name Peyton R. List. She is also the younger as compared to the other actress Peyton List.

Peyton List was born in Florida to John and Suzanne List. She has two other siblings, a twin Spencer List and a younger brother Phoenix List who are also actors and models. The family moved from Florida to Brooklyn when List was four years. She had her elementary education at The Carroll School, New York and continued at the New Voices School of Academic and Creative Arts, New York City. Peyton List then enrolled at the Oak Park High School, Oak Park, California and completed in 2016.

Peyton List had an early movie career as a young actress at age four. She first appeared in the movie As the World Turn in 2002 as a young girl at dinner. She then acted in All My Children as Bess in2004. That same year, she showed up in Spiderman 2 as a young girl playing on the stairs. She was however not credited for the act because it was just a one scene role. Her childhood films went on and on but started to gain some recognition when she featured in the movie Remember Me alongside Robert Pattinson. She acted as a bully of Pattinson’s sister in the film. With her performance always improving, she had the chance to appear in the Disney film The Sorcerer’s Apprentice in 2010. That same year, she appeared in Lifetime Movie Network’s Secret in the Wall which she played alongside actors like Kay Panabaker and Jeri Ryan.

Peyton List apart from acting also ventured into modelling, and her first job was for Justice Magazine in 2011. Her stunning beauty had already found itself on the cover of the American Girl’s 2009 Back to School issue. She was able to combine modelling and acting efficiently and did it concurrently. She has appeared in numerous advertisements for several companies. The ever beautiful and talented actress brought her real class to bear when she was cast in Disney’s series, Jessie as Emma Rose in 2011, a role she would play till 2015. Peyton List played alongside Debby Ryan and Karan Brar.

Jessie after season four ended with a recap of the roles of List, Brar and Skai Jackson in spinoff series Bunk’d. In 2012 List played in Diary of a Wimpy: Dog Days. With her growing interest in music, she looks forward to composing and sing in the upcoming years. This music interest prompted her performance with Ingrid Michaelson at one of his concerts.

This young actor also loves music and plans to start working towards this new found interest. She even performed ‘I Love it,’ a song originally credited to the team ‘Icona Pop,’ with Ingrid Michelson- an American singer.