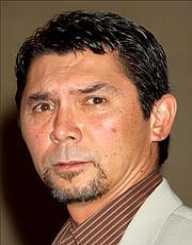 American actor and director Lou Diamond Phillips was born on February 17, 1962, in a U.S. Naval Base, Subic Bay Naval Station in the Philippines. His father Gerald Amon Upchurch was a crew chief on a C-130 in the United States Marine Corps and was of Scottish-Irish and one-quarter Cherokee ancestry. His mother Lucita Umayam Arañas, a native of Candelaria, Zambales, is Filipina. He was named after the Marine Legend Leland "Lou" Diamond. The second husband of his mother adopted him and the surname of his stepfather Phillips officially became his own.

Lou Diamond Phillips was brought up in Texas and attended Flour Bluff High School in Corpus Christi, from where he earned his high school graduation in 1980. He got his Bachelor of Fine Arts in Drama (BFA) from the University of Texas at Arlington. He was associated with the local drama club productions and a local comedy troupe during his college days. He participated in numerous productions in the Stage West Theatre in Fort Worth, Texas, while studying at the University.

Lou Diamond Phillips made his film debut in 1986 in a low budget Hollywood Film called ‘Trespasses.’ His big break came in the following year when he landed the role of the ill-fated rocker Ritchie Valens in the 1987 Hollywood movie ‘La Bamba.’ The biographical drama film became a cult hit, and Phillips suddenly found himself in the position of the most promising young actor seemingly out of nowhere. Before the big break, he was seen in an episode of ‘Miami Vice’ (episode-Red Tape, aired on March 13, !987) portraying the character of detective Bobby Diaz. His next film ‘Stand and Deliver,’ an inner-city high school drama, was filmed before ‘La Bamba’ but was released a year later in 1988.

Lou Diamond Phillips' dynamic and intense performance in the role of a gang member whose life is changed by a tenacious and caring math teacher (enacted by Edward James Olmos) in ‘Stand and Deliver’ brought him a Golden Globe nomination for Best Supporting Actor - Motion Picture. He won the Independent Spirit Award for Best Supporting Male. He had two other releases during 1988. In ‘Dakota’ he played the title role of John Dakota, and in ‘Young Guns,’ a commercially successful film, he played the role of an outlaw, which was widely appreciated. In 1989, he appeared in two movies, ‘Disorganized Crime’ and ‘Renegades.’ In 1990, Phillips acted in a short film ‘Arduous Moon’ before making a second appearance in ‘Young Guns II,’ a sequel of the ‘Young Guns.’

During the early 1990s, Lou Diamond Phillips starred in a series of mediocre films like ‘Harley’ (1991), ‘Shadow of the Wolf’ (1992) and ‘Sioux City’ (1994) without any box office success. He came back into reckoning once again with his supporting role in ‘Courage Under Fire’ (1996) co-starring Denzel Washington and Meg Ryan. The film was a box office success. Phillips made his Broadway debut in 1996 when he played the role of the King in the 1996 Broadway production of ‘The King and I.’ The paradigm mid-career shift caused a bit of a stir, but Phillips saw it as an endorsement of his ability to diversify. The role earned him a Tony Award nomination apart from a Theatre World Award.

His seamless transition between stage-movie-stage was once again up for a surprise when in 2001 he made a crossover to Television. He appeared in two episodes of the popular TV action drama ‘24’ as a guest star along with his old friend Kiefer Sutherland. During 1991 also, he appeared in one episode each of the TV series ‘Tales From The Crypt’ and ‘The Untold West.’ From 2005 to 2010, he appeared in a recurring role of an FBI agent Ian Edgerton in the television series ‘Numb3rs’. In 2005, he also appeared in three episodes of a mini-series ‘The Triangle.’ Between 2012 and 2015, he was seen in 43 episodes of ‘Longmire.’ In 2013, he starred in the comedy short film ‘Lucy in the Sky with Diamond.’

Lou Diamond Phillips participated in two most prominent reality TV shows and also won them. He won the second season of the NBC reality series, ‘I'm a Celebrity...Get Me Out of Here!’ over pro wrestler Torrie Wilson. He also contested in the Food Network reality series, ‘Rachael vs. Guy: Celebrity Cook-Off’ in 2012 and was announced as the winner of the same winning $50000 for his charity in the process.

Apart from his unique acting talent, Phillips was also a vocalist with the Los Angeles-based rock group ‘The Pipefitters’ during the mid-90s. He is also a regular Poker player. In the 2009 California State Poker Championship, Phillips was placed 31st among the 403 participants. He participated in the World Series of Poker in Las Vegas and earned over $30000 in prize money.

Lou Diamond Phillips won the Independent Spirit Award for Best Supporting Male in 1988 for his performance in ‘Stand and Deliver’ and also won the Western Heritage Award Bronze Wrangler Theatrical Motion Picture for ‘Young Guns’ in the same year.

Lou Diamond Phillips met assistant director Julie Cypher while making the movie Trespasses. They got married on September 17, 1987, only to be divorced on August 5, 1990. Her first wife later announced that she is a lesbian and partnered with Melissa Etheridge. After a brief affair with actress Jennifer Tilly, Phillips married Penthouse model and television extra Kelly Preston in 1994. The couple was blessed with three daughters. However, they got separated in 2004 and divorced in 2007.

Phillips began dating makeup artist Yvonne Boismier in 2004. He tied the nuptial knot with his third wife Yvonne in August 2007. Their daughter, Indigo, was born in October 2007.