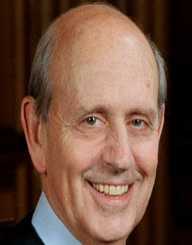 Stephen Breyer is an American lawyer and member of the Supreme Court.

Stephen Gerald Breyer was born in the city of San Francisco, California, on August 15, 1938. His father, Irving, worked for the San Francisco Board of Education. His mother’s name was Anne. He has a younger brother, Charles. He was a part of the Boy Scouts.

Stephen Breyer briefly worked for the commission that investigated President Kennedy’s assassination. In 1964, he became a law clerk for Arthur Goldberg, Supreme Court Associate Justice. He then spent two years as a special assistant for the Assistant Attorney General.

In 1967, Breyer became a professor at Harvard Law School. He stayed at that job until 1994. He specialized in administrative law. He wrote several textbooks which are still used. He was also a guest lecturer at the Tulane University Law School, the Sydney College of Law, and the University of Rome.

While at Harvard, Stephen Breyer occasionally worked on other projects. He was an assistant special prosecutor during the Watergate scandal. In 1974 and 1975, he served as a special counsel for the Senate Committee on the Judiciary. In 1979 and 1980, he was the chief counsel there. In 1980, he became a judge on the U. S. Court of Appeals. In 1990, he became the Chief Judge. He was also a member of the Judicial Conference and the Sentencing Commission.

In 1994, President Clinton nominated Stephen Breyer as a Supreme Court Associate Justice. He was soon confirmed by the Senate. Breyer is still at that position to this day. He holds the second place for the longest time served as a junior justice in the history of the court.

Stephen Breyer has become distinguished by his pragmatism and analytical style. His views are usually liberal. He is pro-abortion and pro-gun control. Still, he has also gained the respect of his Conservative opponents.

In 2005, Stephen Breyer released the book Active Liberty: Interpreting Our Democratic Constitution. He wrote about the consequences of rulings and the people’s participation in the government. In 2010, he released The Court and the World: American Law and the New Global Realities. He wrote about the connection between the United States and international law.

Stephen Breyer married Joanna Hare, a British psychologist with aristocratic origins. Her father was a Viscount. They have three children – Chloe, Michael, and Nell.