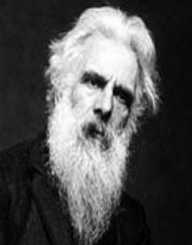 Edward James Muggeridge or Eadweard Muybridge was born 9th April 1830, to John and Susanna Muggeridge. He was born in Kingston upon Thames, in Surrey, England. Muybridge was one of four brothers. His father was a merchant selling grain and coal, with his business space downstairs from their living quarters which were upstairs.

Muybridge’s father died in 1843, and his mother then took over the business.

In 1850, Eadweard Muybridge moved to the United States. He settled in New York City, and in 1855 he moved to San Francisco. The city was still booming from the gold rush, and Muybridge went into business as a bookseller, and as a publisher’s agent for the London Printing and Publishing Company.

In 1860, Muybridge left his brother in charge of his successful bookshop while he was getting ready to sail to England to purchase more books. Muybridge missed the boat in San Francisco, so caught a stagecoach to St. Louis where he would find a train to New York City and sail from there.

The stagecoach had a severe accident which left Eadweard Muybridge with severe injuries. He was in the hospital for three months recovering before returning to New York City, and he then spent a further 12 months in treatment before he was able to sail for England.

Medical thought at the time was that Muybridge had possibly suffered a substantial injury to the orbitofrontal cortex, extending into the anterior temporal lobes. An injury like this would have freed up Muybridge’s creativity without thought for social restrictions. Even in the present time, there is no effective treatment for such an injury.

Muybridge spent time in England recuperating and was receiving treatment from Sir William Gull. During this period in the early 1860s, he took up photography on a professional basis. He was also successful in securing two British patents for inventions he created.

In 1867, Eadweard Muybridge returned to San Francisco and was soon a very successful photographer. His subjects were primarily landscape and architecture, but he also advertised that he did portraiture. His works were sold through various galleries and other firms.

Muybridge’s reputation was cemented with photos of Yosemite Valley and the surrounds of San Francisco that he took in 1867. In 1868, he was commissioned by the U.S. government to travel to Alaska to photograph the Tlingit Native Americans and landscapes.

Over the next few years, Eadweard Muybridge was commissioned by groups such as the Lighthouse Board and the United States Army. His photography was widely used and is still in circulation today.

In 1872, as part of a commission, Muybridge undertook the study of a horse’s gait. The question was whether all the horse’s hooves left the ground at the same time while trotting and while galloping. He spent several years perfecting his method of photographing horses while they were moving, particularly between 1878 and 1884. He first proved that all the hooves were off the ground while trotting, and he then showed the same while the horse was in a gallop.

Eadweard Muybridge made regular trips to England and Europe to advertise his work. In 1882, he gave a sold-out lecture at the Royal Institution in London. In the 1880s, he was sponsored by the University of Pennsylvania to study movement in humans and animals. Between 1883 and 1886, Muybridge created more than 100,000 images. In 1887, the photos were published in a vast portfolio. There were 781 plates with 20,000 photographs. The publication was called, Animal Locomotion: An Electro-Photographic Investigation of Connective Phases of Animal Movements.

Muybridge’s work was considered a substantial contribution to the study of mechanics in athletes, as well as advanced the science of biomechanics. Several of his books are still in print and are used by artists, animators, and students of movement in animals and humans. When he was finished with his work at the University of Pennsylvania, Muybridge travelled across the U.S. and gave regular lectures and demonstrations of his still photography.

In 1894, Muybridge returned to England where he continued to lecture. He returned to the U.S. in 1896 to tidy up his affairs before retiring to England. He published two more books, Animals in Motion (1899) and The Human Figure in Motion (1901). These books both remain in print to the present day.

Eadweard Muybridge changed his name several times over the years. His names included Muggridge and Muygridge.

Muybridge went to Larkyns’s house and shot him. He was arrested but pleaded insanity due to the head injury he had sustained in the stagecoach accident. Although the jury dismissed the insanity plea, they acquitted him on the grounds of “justifiable homicide.”

After trying twice, Stone was granted a divorce from Eadweard Muybridge. She died in 1875, and Muybridge paid to have Florado looked after, but had very little to do with him. Muybridge died on 8th May 1904 from prostate cancer. Many of Muybridge’s papers and artifacts were initially donated to the Kingston Library, but are now in the Kingston Museum.

Many of his photographs are held in the archives at the University of Pennsylvania, and at The Stanford University Libraries. Several exhibitions have been shown over the years of his works.