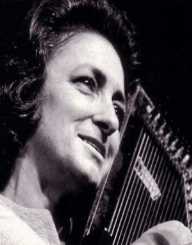 Mother Maybelle Carter is an astonishing, ground-breaking guitarist and singer. Maybelle was born on 10th of May 1909. Also, she began her art at a tender age and later joined her cousin to form up The Carter Family. Moreover, Maybelle started performing with this group at the age of 16. Therefore, their collaboration saw to the rise of hundreds of songs including the best of the best Wild Flower and Keep on the Sunny Side. Their work brought a significant influence on the direction the modern country music took.

Maybelle Addington was born on 10th of May 1909 in Midway, Western Virginia. In addition, she was born the second child of the six children in the family to Hugh Jack Addington and Margret Elizabeth Kilgore. Moreover, they were businessmen, farmers and also owned a  lumber mill.

The members of the Addington family loved music. Therefore, Maybelle followed suit and started playing different organs. However, she settled on the guitar as her favorite instrument by the time she was 13. In addition, she learnt folk songs from her mother that were passed down from generation to generation in the valley in which they lived. She used these songs to sharpen her skills and play at different parties.

When Maybelle was 6, one of her cousins Sara Dougherty married a local musician by the name A.P Carter in the year 1915. Therefore, at the age of 15 years, she left school and decided to pursue her talents. Moreover, she was halfway through with high school at the time. She chose to join A.P and Sara and perform with them.

The December of 1925, found them performing in Maces Springs, Virginia in a schoolhouse. There she met with A.P’s brother Ezra and fell in love. She was only fifteen at the time. The next year saw them wed at the age of 16 on the March of 1926. This marriage cemented the relationship between the two families. They then started performing under the brand, The Carter family.

The Carter Family got their big break on July 1927. There was a local talent scout for music by Ralph Peer who was having open auditions and recording session in Bristol in Tennessee. At the time she was 18 and seven months pregnant. She made the trip to Bristol all the same through the 18-hour car ride.

On reaching the auditions, they were able to record a total of six songs. These songs included the country classical, Poor Orphan Child, Wandering Boy and finally, The Storms are on the Ocean. The year 1927 saw their songs being released to the public through Victor's label. The songs took the market by a storm surprising even Ralph Peers himself.

After doing so well in their first recording session, they went back to the studio in 1928 in New Jersey for a second recording. Their song Wild Flower recorded during this time became one of their best of all time. The song sold over 120,000 copies immediately after its release. The new powerful radio station was coming up and cemented their fame.

Maybelle met Ezra Carter and got married on the 13th of March 1926. She got married to Ezra when she was only 16 years old. Their union was blessed with three daughters namely Helen, Valarie, and Anita.

The death of Mother Maybelle Carter came on the 23rd of October 1978. She was 69 years old at the time leaving behind a rich legacy of music and adoring fans. Her music and style pioneered how the country music is played. She is fondly remembered for her weighty contribution to the music industry.