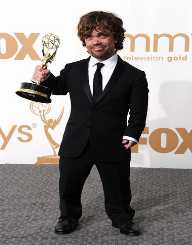 American actor and film producer Peter Hayden Dinklage was born on June 11, 1969, in Morristown, New Jersey. His father John was an insurance salesman, and his mother, an elementary school music teacher. Dinklage was born with a condition called achondroplasia, which is a common form of Dwarfism.

Dinklage first developed the interest in theater when he was in elementary school. In fifth grade, Dinklage made his stage debut in the production of The Velveteen Rabbit, where he played the lead role. He loved being on the stage and continued to perform. Dinklage attended Bennington College, where he appeared in several productions.

Peter graduated from Bennington in 1991 and moved to New York City. Together with his friend Ian Bell, he had the vision to build his own theater company. But unfortunately, they were not able to afford the rent. After seeing Sam Shepard’s play True West, Dinklage decided to pursue the career in acting.

Dinklage’s screen debut was the 1995 film Living in Oblivion. He portrayed an actor with dwarfism who is frustrated with his clichéd roles. In the film, he played alongside Steve Buscemi, who later recommended director Alexandre Rockwell to cast Dinklage in his comedy 13 Moons (2002).

In 2003, Peter Dinklage had his breakthrough in the film The Station Agent. He portrays a man with a deep love for trains, who seeks solitude in an abandoned train station. For his performance, Dinklage was nominated for the Screen Actors Guild Award as Best Actor. The same year he also starred in the film Elf, as Miles Finch - a children’s author with an easily irritable character.

Peter has also made appearances in The Baxter, as a wedding planner and in adventure comedy Lassie. His drama genre performances include the courtroom film Find Me Guilty and TV series Nip/Tuck. He has also played himself in HBO series Entourage and NBC’s 30 Rock.

Since 2011, Peter Dinklage has played Tyrion Lannister in HBO’s adaptation of George R.R. Martin’s A Song of Ice and Fire. Game of Thrones has been a major success since its first release. Dinklage’s performance has been received with a lot of praise. In 2011 and 2015, Dinklage received an Emmy award for Outstanding Supporting Actor in Drama Series. He also won a Golden Globe in 2012 for his role. After the first season, Dinklage’s onscreen time was increased, and he became one of the top billing actors on the show from the second season.

Peter Dinklage has been married since 2005, with theater director Erica Schmidt. In 2011, they had a daughter, but her name hasn’t been publicly released. They currently reside in New York.

He was born with the condition that affects bone growth - achondroplasia. He is 1.35 m tall, with typically sized head and torso, but short limbs. He has stated that while growing up, it was hard to deal with his condition, but he has learned to deal with it. In his Golden Globe acceptance speech, Dinklage spoke out about an incident in England, where a dwarf actor was beaten up by a rugby player. Since then he has been asked several times to speak on behalf of people suffering from his condition, but he has refused.

When Peter Dinklage was 16, he became a vegetarian. He is an outspoken animal right activist and supports the Farm Sanctuary and its project Walk for Farm Animals. He has also been the narrator or Face Your Food - PETA project advocating vegan diet on ethical grounds.