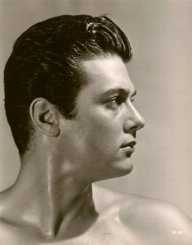 Tony Curtis was born Bernard Schwartz on June 3, 1925, in Bronx, New York. His parents were Slovak and Hungarian Jewish immigrants. Curtis learned English only when he was five years old. His father was a tailor, and the family with three boys lived in the back of the shop. His mother was often very aggressive and even beat up her children. She as well as one of Curtis’ brothers were diagnosed with schizophrenia and were institutionalized,

When Tony Curtis was eight years old, he and his brothers were placed in an orphanage, because their parents could not afford to feed them. They spent a month in the institution. His brother Julius was struck by a truck and killed four years later. After this, Curtis joined a local neighborhood gang and was responsible for several petty crimes. A neighbor saved him from a future in the criminal world by sending him to a Boy Scout camp. There, Curtis worked off his energy and later went to Seward Park High School. It was where Curtis first became interested in acting.

After the attack on Pearl Harbor, Tony Curtis enlisted in the United States Navy. He joined the Pacific submarine force, inspired by films Destination Tokyo and Crash Dive. During his time in the navy, Curtis witnessed the Japanese surrender in Tokyo Bay, just from a mile away.

After Curtis was discharged from the Navy, he attended the City College of New York. He then went on to study acting at The New School in Greenwich Village. Curtis went to Hollywood when he was 23 years old. He later changed his name to Tony Curtis, taking his name from the novel Anthony Adverse and his surname was from his mother’s family name Kurtz. He got a contract with Universal Pictures. At the time, he admitted he was more interested in women and money than in building a career. Still, his greatest fear was to return home as a failure.

Tony Curtis made his screen debut in 1949 film Criss Cross, where he played a rumba dancer. He made his breakout performance in 1957 in the movie Sweet Smell of Success. A year later, he starred as Sidney Poitier in The Defiant Ones, a role which earned him an Academy Award nomination.

Curtis’ best-known comedy films include Some Like It Hot (1959), Sex and the Single Girl (1965) and The Great Race (1965). He was also a major star in several drama genre films, including The Outsides (1961) and TarasBulba (1962). In 1960, Curtis was nominated for the Golden Globe for his role in Spartacus. Besides his work on several film projects, Curtis also appeared on TV. He starred in the TV series The Persuaders. He also starred in shows McCoy and Vegas.

In the 1980s, Tony Curtis made his previous hobby painting his second career. His work is mostly surrealist, and Curtis has quoted Van Gogh, Picasso, and Paul Matisse as his influences. He has openly spoken about his disappointment for never receiving an Oscar Award. In 2006, Curtis was awarded Sony Ericsson Empire Lifetime Achievement Award. He also has a star on the Hollywood walk of fame.

Tony Curtis has been married six times. His first marriage was to Janet Leigh in 1951, a marriage that lasted 11 years. The couple had two daughters- Kelly and Jamie Lee, who are both actresses. His studio was against the marriage since they believed it would kill his career and box office.

After divorcing from Leigh, Curtis married Christine Kaufmann, a 17-year-old actress. They had two daughters together but divorced in 1968. Curtis had two children with his next wife, Leslie Allen. He was also married to Andrea Savio, Lisa Deutsch, and his last wife, Jill Vandenberg Curtis. He was married to Jill from 1998 until his death in 2010. She was 42 years younger than he. Curtis’ son Nicholas died of drug overdose in 1994.

In the mid-1980s, Tony Curtis had alcohol and drug abuse problem. He was addicted to cocaine, and often declined movie roles due to his addiction. As a result of his alcoholism and drug addiction, Curtis developed liver cirrhosis, and in 1984, he was even hospitalized. He later recovered, after going to rehab in Betty Ford Clinic.

In 1994, Curtis suffered from a heart attack and had to undergo bypass surgery. In 2006, he contracted pneumonia and was in a coma for a month. After recovering, Curtis had to use a wheelchair. In 2008, he was hospitalized after an asthma attack. Curtis died at his home in Henderson in 2010, after a cardiac arrest. He had a lot of lung problems due to his smoking, even though Curtis had quit 30 years earlier.