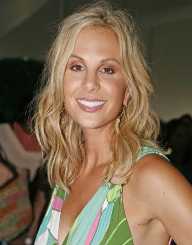 Born on May 28, 1977, Elisabeth Hasselbeck is a famous American television personality and a talk show host. She came to fame after placing fourth in the in the season two of the American version of Survivor in 2001. Her surname Hasselbeck came from her marriage to NFL quarterback Tim Hasselbeck in 2002. Elisabeth Hasselbeck became the host of The View, replacing Lisa Ling in November 2003 as the fourth host of that program. Along with her co-hosts, Barbara Walters, Whoopi Goldberg, Joy Behar and Sherri Shepherd, she won the Daytime Emmy Award for Outstanding Talk Show Host at the 36th Daytime Emmy Award.

Elisabeth Hasselbeck left The View in July 2013 after serving as a host for almost a decade. In September, same year, she became the co-host of Fox & Friends. She left the show two years later in her bid to have more time for her family, hosting her last program on December 22, 2015.

Elisabeth Hasselbeck worked with Puma in 1998, back in college and continued working as a member of the design team of the company after graduating. She later quit to pursue a television career.

Elisabeth Hasselbeck contested in the season two of Survivor: The Australian Outback in 2001. She was a member of the Kucha tribe, but the tribe later merged with the Ogakor tribe. Elisabeth Hasselbeck  took the fourth position at the end of the show and was given an invite to partake in the next edition Survivor: All Stars, which she refused. That same year, Elisabeth Hasselbeck  formed part of the judges at the Miss Teen USA 2001 pageant. She then hosted Style Network’s The Look for Less from 2002 to 2003.

In 2003, Elisabeth Hasselbeck auditioned for ABC’s The View, upon the advice Elisabeth Hasselbeck of her agent who wanted her to prove her worth even though Elisabeth Hasselbeck wanted to be behind the scene. She then became one of the guest hosts with the potential of replacing co-host Lisa Ling. Lisa had left the show at the end of 2002. On November 24, 2003, she was made a permanent co-host of The View. Elisabeth Hasselbeckengaged in a heated debate as she strongly opposed to the Food and Drugs Administration allowing themorning-after pill to be sold over the counter. In her argument, she stated, "I believe that life begins at the moment of conception."

Elisabeth Hasselbeck  was of the view that, over-the counter pills be banned in totality even in the case of incest or rape because life was valuable. Elisabeth Hasselbeck insisted that advocates for such pills just used the exception of rape and incest as an excuse to making the pill generally accessible.

Elisabeth Hasselbeck on May 23, 2007, with her support for the war in Iraq, had a heated on-air debate with co-host Rosie O’Donnell who was against it.O’Donnell went on to ask "655,000 Iraqi civilians dead. Who are the terrorists?" which generated criticism from supporters of the war and conservative commentators including Fox News anchor Bill O'Reilly. As the backlash started pouring in O’Donnell was infuriated that Elisabeth Hasselbeck did not come to her defense, which she responded "defend your own insinuations," adding that she need not defend others statements for them, especially those who have the platform for defending themselves.

Elisabeth Hasselbeck  along with her co-hosts Barbara Walter, Joy Behar and Sherri Shepherd was awarded the Daytime Emmy Award for Outstanding Talk Show Host in August 2009. Elisabeth Hasselbeck  left The View after her last host on July 10, 2013. ABC had already confirmed of her leaving a day before to join Fox & Friends.

After quitting from The View, Elisabeth Hasselbeck replaced Gretchen Carlson as the co-host ofFox News morning show, Fox& Friends on September 16, 2013. The show’s rating when up by 9 percent and viewership also increased by 10 percent among people between the age 25 to 54, in just a month after joining.

Elisabeth Hasselbeck announced leaving the show on at the end of the year 2015 in a statement in November that year. This was to allow her to have enough time for her family, stating that "give them the best of me, not the rest of me". Elisabeth Hasselbeck  finally left Fox News on December 22, 2015.

Elisabeth Hasselbeck on July 6, 2002, married her college boyfriendNFL quarterback, Tim Hasselbeck. They are blessed with three children; a daughter, Grace Elisabeth and two sons Taylor Thomas and Isaiah Timothy. Elisabeth Hasselbeck is a devoted Christian and strongly condemned the persecution of Christians in Iraq. She was also against the removal of Bibles from United States hotel rooms.

Elisabeth Hasselbeck is has a health complication and lives with celiac disease. Elisabeth Hasselbeck talks about her health condition in her book, The G-Free Diet: A Gluten-Free Survival Guide. The book became popular and appeared on several best-seller lists. Elisabeth Hasselbeck , however, faced a backlash when a suit was filed against her at the federal court in Massachusetts on June 23, 2009, for an allegedly plagiarisingthe self-published book by Susan Hassett.

Elisabeth Hasselbeck  countered the accusation by releasing a statement calling it baseless. In November 2009, the case was dismissed as the lawyer for the plaintiff declined to continue with it. According to him, even though there was some degree of plagiarism in Elisabeth’s book, it was not enough to seek monetary damages. Elisabeth Hasselbeck  launched NoGii, a gluten-free nutritional products for children and adults in 2011.