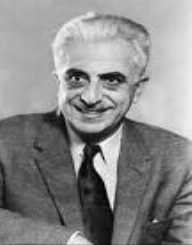 Gregory Godwin Pincus was born on April 9, 1903, in Woodbine, New Jersey, United States. He was an American biologist and pioneer of the hormonal and reproductive research. He invented the first oral contraceptive pill alongside other scientists.

The ‘Pill’ was used for population control. It helped women gain more control over their bodies. He died on August 22, 1967, at the age of sixty-four.

Gregory Godwin Pincus was born on April 9, 1903, to Polish Immigrants Joseph Pincus and Elizabeth. He was born in Woodbine, New Jersey, United States. Gregory attended Cornell University and earned his bachelor’s degree in agriculture in 1924.

He worked as a tutor in Zoology at Harvard University at the same time studied for his master’s and doctorate degrees. In 1927, he moved to Cambridge University in England accompanied by Richard Goldschmidt.

The two researched at Kaiser Wilhelm Institute for Biology in Berlin until 1930. From 1930 he taught general physiology at Harvard University and in 1931 became an assistant professor in the institution.

While still working as an instructor at Harvard University, Gregory Pincus ventured much in research work. He spent most of his time in the lab researching inherited traits.

He later started researching reproduction with his early experiments involving the transfer of one egg from one animal to the other. His focus was to achieve the surrogate mother model.

He also worked to determine whether diabetes was an inherited disease and to identify the connection between hormones and stress. He also focused on the role of the endocrine system in mental disabilities.

In 1934, Gregory Pincus conducted successful research by breeding rabbits without males. He instead used artificial insemination method. Although his study was misunderstood, the experiment is believed to have led to the use of in vitro for human beings.

In 1944, he became one of the founders of the Worcester Foundation for Experimental Biology in Shrewsbury, Massachusetts. With this establishment, he continued with his research on the connection between hormones and disease.

The research explored diseases such as cancer, schizophrenia, and heart-related diseases. More than three hundred scientific researchers worldwide had joined the institution by the end of the 1960s to perform research.

Gregory Pincus also began researching on the causes of infertility together with biologist Dr. Chueh Chang in early 1950s. The two used progesterone to restrain ovulation by using synthetic substances acquired from a pharmaceutical company. In the late 1950s, they were joined by Fertility expert Dr. John Rock to begin their experiments with humans.

After much trial which brought forth several results, they came up with a pill known as Enovid. Enovid received approval from the FDA as the safest oral contraceptive pill. It became marketable in the United States in May 1960.

Gregory Pincus received some awards including the Cameron Prize in Practical Therapeutics from the University of Edinburgh and the Albert D. Lasker Award in Planned Parenthood. In 1965, he was elected into the National Academy of Sciences.

Gregory Pincus married Elizabeth Notkin in 1924 and together had three children. His wife Notkin died in 1988. Gregory died on August 22, 1967, in Boston, Massachusetts, United States. He died at the age of sixty-four.