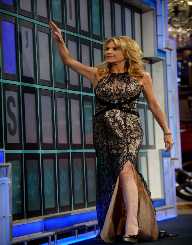 Vanna White was born on February 18th, 1957. Her place of birth was in South Carolina in Conway. Over the years, she was famous for being the host of the Wheel of Fortune show. Before entering the TV industry, she was a model. White is a crocheter enthusiast. As a result of this, she has her line of crochets branded Vanna’s Choice. She is a proud mother of two.

Vanna Marie Rosich AKA Vanna White was born on February 18th, 1957. She is the daughter of Miguel Angel Rosich and Joan Marie. Sources claim that her father was of Spanish descent. When White was still young, her father abandoned them. It is for this reason that Vanna White took his step father’s name ‘White.’ Herbert Stackley White Jr was White’s stepfather and that he worked as a real estate agent.

Shortly after graduating from high school, Vanna White had a dream of becoming a model. Therefore, she moved to Atlanta where she would pursue this career. Here, she schooled in Atlanta School of Fashion. It did not take time before she moved again to L.A. (Los Angeles) where she was to pursue her acting career. This was in 1979. A year later, she had to return shortly to South Carolina to check on her mother. She had ovarian cancer, and things were not working well for her regarding health.

Vanna White later returned to Hollywood, and this time she had significant resolutions. Doors opened up for her as she landed several minor acting roles in some films including Gypsy Angels-1980, Looker and Graduation Day in 1981. In 1982, she was featured in the series Star of the Family. Well, she only appeared in a single episode, but this was still important to her.

Still, in 1982, the wheel of fortune indeed landed luck on Vanna White’s end. She was one of the luckiest applicants as she was chosen amidst other 200 applicants for the job as a co-host in an upcoming game show Wheel of Fortune. She was to work alongside Pat Sajak, who was a former weatherman. This was a big hit for White as it was a major reality show from NBC.

Four years down the line, the show was a big hit, and they had to go for an evening version which further attracted over 30 million viewers. The show went on until recently in 1999 and that it was still popular among many people with over 40 million viewers.

Unlike other awards where people are honored for their unique abilities that come from their hard work, well, Vanna White was different. The Guinness Book of World Records recognized White for her clapping skills. In every show, she averaged 720 claps. By the time a single season ended, she had 28,000 claps.

In 1986, tragedy hit Vanna White as her soul mate, John Gibson, died in a horrific plane crash. In 1990, Vanna While fell in love and got married to George San Pietro, who was a restauranteur. She had a son and a daughter. As a result, i.e., Nicholas and Giovanna respectively. In 2002, White divorced San Pietro.