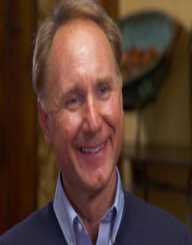 Daniel Gerhard Brown was born on June 22, 1964, in Exeter, New Hampshire. He was the oldest of three children to his parents. His father Richard was a teacher of mathematics and author of several textbooks in Phillips Exeter Academy. Both of his parents were musicians and served in church choirs. His mother was a church organist.

As a child, Brown was interested in puzzles and secrets. He and his younger brother used to work out anagrams and crossword puzzles and participated in treasure hunts, which his father devised on birthdays and holidays. Brown was educated in the Phillips Exeter Academy and later attended Amherst College. During college years, he played squash and sang in the school’s glee club. He also began studying writing with Alan Lelchuk. In 1985, he spent a year of school in Seville, Spain in an art history course at the University of Seville.

Brown graduated from Amherst in 1986 and began his career as a musician. He produced a children’s cassette SynthAminals. He formed his record company Dalliance and published a CD entitled Perspective. The CD sold a few hundred copies. In 1991, he moved to Hollywood to pursue his singer-songwriter career and worked at the Beverly Hills Preparatory School as a teacher. After moving to Hollywood, Brown joined the National Academy of Songwriters and was an active member, participating in several events. There he met Blythe Newlon, who took an interest in Brown's work and helped him with a promotion of his projects. The two also developed a personal relationship and in 1993 moved back to New Hampshire, eventually marrying in 1997.

After moving back to New Hampshire, Brown released a CD entitled Angels & Demons. During this time he also became an English teacher at the Philips Exeter and also gave Spanish classes in Lincoln Akerman School.

Brown was reading Sidney Sheldon’s novel The Doomsday Conspiracy In 1993 when he got the idea of writing thrillers. He began working on Digital Fortress, which was mainly set in Seville. He and his wife co-wrote the book, 187 Men, to Avoid: A Survival Guide for the Romantically Frustrated Woman. In 1986, he quit his job as a teacher and published his first book in 1998. His wife was taking care of promotion of the book. A few months later, the couple released the humor book The Bald Book. In 2000, Brown released Angels& Demons and the following year, Deception Point.

His first three novels did not have much success, selling less than 10,000 copies in their first prints. In 2003, Brown released his fourth novel The Da Vinci Code, which became an immediate hit and peaked the New York Times Best Seller list in its first week of release. Now The Da Vinci Code has become one of the most popular books of all the time, with more than 81 million copies sold. After the success of his fourth book, also his first works gained more popularity. Brown’s income from The Da Vinci Code was estimated to be around $250 million. In 2009, Brown released The Lost Symbol, which sold over one million copies on its first day. In 2013, he released the book Inferno, which also became an immediate bestseller. In 2016, he announced he would publish his next book Origin in 2017.

In 2006, Brown’s novel The Da Vinci Code was adapted to a film with the same name by Ron Howard. The film launched at Cannes Film Festival, however, received overall poor reviews. However, it became the second highest grossing film of 2006, with $750 million earnings worldwide. Brown also wrote and performed the son “Phiano” for the film.