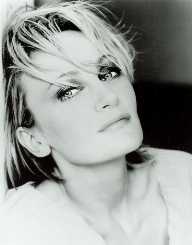 Patricia Kaas was born on the 5 December 1966 in Forbach, France. Her father Joseph Kaas was French and her mother Irmgard Kaas was German. She was the youngest of seven children.

Patricia Kaas came from a musical family and started showing an interest in singing at a young age. She sang at family events and eventually took part in a singing contest which she won. At age thirteen, she was offered a contract with Saarbrücken Club Rumpelkammer and played with Dob’s Lady Killers for several years.

The French actor Gerard Depardieu took an interest in the young singer’s career. He produced her first single Jalouse (1985), but it did not gain any momentum. Didier Barbelivien, the songwriter, heard the single, and eventually, Kass recorded his Lady Sings The Blues (1987) which became her first hit record. Her first album was Mademoiselle Chante. It was a huge hit reached platinum status in French, Belgium, and Switzerland.

During the early 1990s, Patricia Kaas did a world tour performing in sold-out concerts in twelve countries. Her album achieved gold status. She changed record companies and recorded The Stage of Life album which was another success for Kass. In 1993, her third album was produced in the UK Je Te Dis Vous which had three tracks on it in English including the classic It’s A Man’s World. Kass toured again promoting the album and playing a total of 150 concerts.

In 1995, there was a rumor that Patricia Kaas had recorded an album entitled Black Coffee with exclusively English lyrics. In 1997, In My Flesh (Dans Ma Chair) was released. It contained a duet with James Taylor (Don’t Let Me Be Lonely Tonight). Towards the end of the decade, she took part in the Michael Jackson & Friends benefit concerts.

During the 2000s, Kass continued recording and performing at sell-out concerts. She sang at the Jardin du Luxembourg Park before all the mayors of France in 2000, accompanied by the Orchestre National de Lille. She released Piano Bar by Patricia Kass in 2002 and followed this up with the Piano Bar Live Tour covering Asia, Europe, and the USA.

Patricia Kaas turned to acting in the film And Now...Ladies and Gentleman (2001) with Jeremy Irons. In 2001, her Rien ne s'arrête album was released, featuring songs from between 1987 and 2001. Piano Bar by Patricia Kaas, an all-English album came out in 2002, and she went on a promotional tour of Asia, Europe, and the United States. She released Sexe fort in 2003, then toured worldwide promoting it.

Kaas took part in the Eurovision Song Contest in 2009 and finished eighth. In November 2016, the album Patricia Kaas was released, and Kaas will be spending 2017 touring to promote it.

Ever since the early days in 1987 when she won the Discovery of the Year award, Patricia Kaas has been winning awards including Germany’s The Golden Europa in 1990 and 2002. She won the Bambi Award in 1991 and 2003, the First Class Order of Merit of the Federal Republic of Germany.

Patricia Kaas lost her mother to cancer in 1989, and her father died a few years later. She is single and has no children. Her autobiography came out in 2011. Entitled L’Ombre de ma Voix, the book has been translated into some languages and is a bestseller.