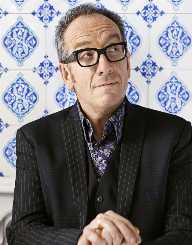 Best known for his groundbreaking changes in the style of punk rock and pop music, Elvis Costello is a new wave artist of the 80’s.

Elvis Costello brought many innovations in the field of music often combining the lyrical flavor of other styles with the energy of the punk music.

Elvis Costello was born as Declan Paris McManus on August 25, 1954. His birthplace is Paddington, London, UK. Costello’s father was a musician named Ross McManus, and his mother Lilian Alda was a record store owner. Born to parents whose lives centered on music, Elvis Costello was inclined to pursue music at an early age.

Elvis Costello studied high school at the Hounslow Secondary Modern School, and then later at St. Mark’s Catholic Secondary School. He finished his education at the St. Xavier’s college.

Costello was initially hesitant to take up a career in music and worked several jobs before running after his passion. As a musician, he brought many innovative changes and released many popular albums.

At a young age, Costello appeared in a lemonade commercial singing with his father. After finishing his education, he started working as a data entry operator and later a programmer. Music kept calling to him, and he left his job to follow his passion.

Early career was not so bright for Costello. His first band FlipCity did not attract much audience and had to disband. Costello then continued to perform solo.

In 1977, Elvis Costello released his debut album, My Aim is True, under the recording label Stiff. He changed his name to Elvis, after Elvis Presley. It was a major hit due to its innovative package, and Costello became well-known. Slowly, he established himself as an icon of the new wave.

After getting featured in the Saturday Night Live, Costello was introduced to the American audience and started building a reputation with many top albums. His 1983 album, Punch the Clock, reached the U.S. Top 40 charts. He formed a band Elvis Costello and the Attractions and went on to sell multiple mega-hit albums like Signo and the River in Reverse.

Elvis Costello has collaborated with a lot of major artists like Paul McCartney and the Jimmy Fallon band, The Roots. Some of his most famous songs include Veronica, Pump It Up, Alison, and Every day I write the Book.

Elvis Costello has lost much of his charm of the 80’s. He remains a famous star, however. In 2015, he released his autobiography, Unfaithful Music & Disappearing Ink.

Elvis Costello has received several Grammy nominations in his long career. In 1989, he won the MTV award for the Best Male Video for his song “Veronica.”

Elvis Costello has married thrice. His first marriage to Mary Burgoyne in 1974, lasted ten years. In 1986, he married Cait O’Riordan. They stayed together till 2002. One year later, Costello married pianist Diana Krall.