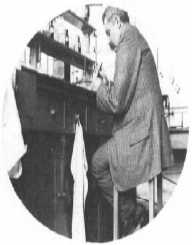 Alfred Werner was a chemist who won the Nobel Prize in Chemistry in 1913.

Alfred Werner was born on 12 December 1866 in Mülhausen, Alsace. Alfred was the youngest of four children for father Jean- Adam Werner, his mother Salomé Jeanette Tesché was the second wife. His father was a factory foreman and a former locksmith.

Alfred Werner studied at the ÉcoleLibre des Frères near home from 1872 and graduated in 1878.

Alfred Werner then enrolled in École Professionelle, where he did Chemistry and did his first research when he was eighteen. He did his mandatory military service in Karlsruhe during 1885 for a year. In Karlsruhe, he attended Chemistry lectures from Karl Engler, at the Technische Hochschule, or Technical High School.

He went to Eidgenössisches Polytechnikum or Swiss Federal Institute of Technology in 1886, after being discharged from the military, where he graduated a Diploma in Technical Chemistry three years later.

Alfred Werner received his Ph.D. from University of Zurich in 1890, as the Swiss Federal Institute of Technology could not grant doctorates until nineteen years later. Alfred did a thesis about spatial arrangements of the atoms in molecules with nitrogen.

After earning his diploma in 1889, Alfred worked as the Assistant for Professor Georg Lunge's laboratory at the Zurich Technical High School. He collaborated with  Professor Arthur Hantzsch for his doctoral dissertation.

As he research, he extended Joseph Achille Le Bel and Jacobus Henricusvan't Hoff's analysis, reducing the spatial arrangements for geometrically isomeric trivalent nitrogen. His study was met with dissent at that time but is now a cornerstone for stereochemistry.

After his doctoral, Alfred Werner did a second paper to qualify for a teaching position. He worked with Professor Berthelot at the Collège de France, researching his theory of affinity and valence.

Alfred Werner replaced August Kekulé’s concept of rigidly directed valences and theorized that there was an affinitive force coming out from the center with equal power in all directions. His model was more flexible. At the same time in Paris, he worked on thermochemical studies under Marcellin Berthelot but abandoned the survey to return to Zurich.

In 1892, Alfred Werner went back to Zurich to work as an unsalaried lecturer in the Technical High School. The next year, he became Associate Professor at the University of Zurich and taught organic chemistry.

His third paper, published in 1893, featured his coordination theory. He had managed to correctly propose correct the structures for coordination compounds that contained complexions, where there would be a central transition metal atom is surrounded by neutral or anionic ligand, forming an invisible bond.

Twenty-nine-year-old Alfred Werner was the Professor of Chemistry at the University of Zurich in 1895, owing mainly to his third paper.  He taught organic chemistry, and then inorganic chemistry in 1902. For the next twenty years, Alfred continues to study new compounds and their configurations.

Alfred Werner managed to discover that some complexes have optically- active isomers, which further proved his theories. Alfred published two books in 1904, entitled New ideas in inorganic chemistry and Textbook of stereochemistry.

Alfred Werner officially retired in 1919, although he stopped lecturing in 1915.

Alfred Werner was awarded an honorary doctorate of the University of Geneva. He was awarded Leblanc Medal for his work and the distinction of Officier de l'Instruction Publique. He won the Nobel Prize in Chemistry in 1913 for his work on coordination compounds.

Alfred Werner was a sociable friend who liked a game with friends, on the pool table, chess set of a card game. Alfred was a Swiss citizen in 1895 and remained in Zurich despite many offers. Alfred and his family spoke French, despite German occupation after the Prussian war.

Alfred married Emma Wilhelmina Giesker in 1894; the couple had a son and a daughter. He later suffered from degenerative arteriosclerosis, made worse by overwork and alcohol.

Alfred Werner died in a psychiatric hospital, Burghölzli on 15 November 1919. The fifty-three-year-old was buried in Friedhof Enzenbühl, Zollikon, Switzerland.