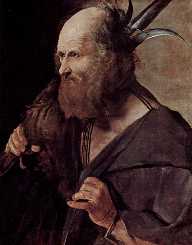 Georges de La Tour was born on 13th March 1593 in Vic-Sur-Seille, in the Diocese of Metz. The Diocese belonged to the Holy Roman Empire, but France ruled from 1552. His father, Jean de La Tour, was a baker. His mother was Sybille de La Tour. La Tour had six siblings. La Tour's education remains unknown, but scholars believe he traveled to Italy or the Netherlands in his early career.

Caravaggio influenced La Tour's early work, which can easily be seen in his paintings. In the middle phase of his painting work, La Tour painted religious works. He painted them in the chiaroscuro style, using sharp contrasts of light and dark.

Georges de La Tour regularly painted subjects several times, which makes his surviving work quite small. Etienne, his son, was also his pupil. As a result, some versions of their work were very difficult to differentiate between.

In 1620, La Tour set up a studio in his wife's hometown of Luneville, in the Duchy of Lorraine. In 1638, he received the title Painter to the King. La Tour also worked for the Dukes of Lorraine in 1623 and 1624. His main clientele was the bourgeoisie, and he became well-known among the nobility.

Georges de La Tour died on 30th January 1652. Hermann Voss, a German scholar, rediscovered La Tour's work in 1915. Galleries throughout the world housework by La Tour. These include Canada, France, the United States, Japan, Germany, and the UK, among others.