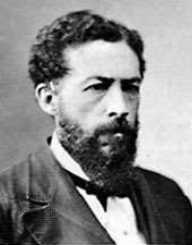 John Mercer Langston was an American lawyer, educationist, and politician. He was the first politician of color to represent Virginia in the US Congress.

John Mercer Langston was born of mixed heritage on December 14, 1829, in Louisa County, Virginia. His father was Ralph Quarles, a wealthy white land and slave owner. His mother was a former slave of African and native Indian heritage. The fourth born of the family, Langston grew up in the care of relatives. His parents died when he was young. Langston was profiled as black due to his mother’s heritage. Unlike other children of African ancestry, he inherited a fortune from his parents.

After the death of his parents, he went to Ohio and later settled in Cincinnati state. In 1843, Langston joined Oberlin College. He graduated in 1849, then enrolled for a Master degree in Theology from Oberlin in 1852. He was however denied entry into law schools based on his race. He studied law under the tutelage of lawyer Philemon Bliss. Langston was admitted to practice law in Ohio in 1854.

In the early years of his career, John Mercer Langston dedicated his time in the emancipation of the slaves. He organized anti-slavery societies and helped fugitive slaves escape to the free northern states. He helped the black community with legal advice and court cases. In 1855 he was elected to the post of town clerk in the Brownheim Township in Ohio. In 1864 he organized the establishment of the National Equal Rights League. This became the precursor of the NAACP. Langston served as the founding president.

In the advent of the American Civil War, he organized the black community to fight for the US army. Langston helped establish the first black regiment unit in the US military. He continued to agitate for the suffrage rights of black communities in the US. Eventually, in 1870, the US electoral system allowed African American male citizens to exercise their right to vote.

John Mercer Langston left for Washington D.C. and continued practicing his legal career. He became more involved in the education of the black community in the US. He founded the law faculty at the Howard University. It became the first law school to admit black students in the US. He became the caretaker founding president of the law department. In the 1875 faculty elections, Langston was denied victory owing to his race.

Two years later, he went to Haiti as the US head consular to Haiti. He represented the US government until 1885. He returned to the US and became the head of Virginia Normal and Collegiate Institute. He consolidated his political base at the historically black college.

John Mercer Langston vied for a congressional seat in 1888. He lost the seat to his Democratic rival. Langston filed an appeal to the electoral body. He cited voter intimidation and electoral fraud during the process.  Langston fought for his victory to be validated for almost two years. He was endorsed as the duly elected representative close to the ending of the Congressional term. He served for the remaining six months from September 1890 to March 1891. He lost in the next elections to the Democrats who controlled most of the state. Nonetheless, Langston became the first black representative from Virginia. As a member of the Republican Party, he encouraged the black community to be more proactive in the affairs of party politics.

He left politics and continued practicing law in the capital. He was made a trustee board member of St. Paul Normal and Industrial College in Virginia. He served at the college until his death.

John Mercer Langston married Caroline Wall in 1854. They met while both were still students at the Oberlin College. Like Langston, Wall was also of mixed races. She had a white military officer father and a black mother. They were blessed with five children in their union.

Apart from Frederick Douglass, John Mercer Langston was the most prominent and influential black figure of his time. He was idolized in several places in the US. His house in Oberlin is now a National Historic Landmark.