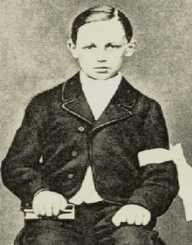 Jean Nicolas Arthur Rimbaud was born on October 20, 1854, in Charleville in Ardennes part of northeastern France. His father Frederic Rimbaud was an infantry captain, who spent most of his career abroad. He participated in the conquest of Algeria and was awarded the Legion d’honneur. While he was transferred to Mezieres, he met Arthur’s mother, VitalieCuif. They had five children together, Arthur is the second one.

His parent’s marriage lasted for seven years, from which most his father spent abroad. After Arthur’s sister Isabelle was born in 1860, Captain Rimbaud stopped coming home for leaves. His mother moved the family to Coursd’Orleans in 1862 and the children, who were before homeschooled, were sent to the Pension Rossat. Their mother had a strong influence on education, pushing her children to scholastic success. When Arthur Rimbaud was nine years old, he wrote an essay objecting to learning Latin in school. Rimbaud and his mother were ardent Catholics, and he had his First Communion when he was eleven years old. He was sent to study at the College de Charleville, where he became a highly successful student. In 1869, he won eight first prizes in the French academic competitions, followed by seven first prizes the next year.

Since Arthur Rimbaud was a highly successful student, his mother hired a private tutor for him when he reached third grade. His tutor AristeLheritier sparkled his interest in Greek, Latin, and French classical literature, and encouraged him to write original verse in Latin and French. His first poem appeared in 1870 in the issue of La Revue pour tous. During this time, Georges Izambard began working at the College de Charleville and became Rimbaud’s mentor. At the young age of 15, Rimbaud showed great maturity as a poet. The first poem he showed Izambard was Ophelie, which became known as one of the best works of Rimbaud.

When the Franco-Prussian War broke out, the College de Charleville became a military hospital. Rimbaud decided to run away to Paris but was arrested on arrival at the Gare du Nord. He was awaiting his trial and wrote to Izambard, who arranged his release. In 1870 his behavior became openly provocative, since he drank, spoke rudely, stole books from local shops and abandoned his neat appearance.

Arthur Rimbaud had written to several poets, but received no replies. He was advised to write to the Symbolist poet Paul Verlaine. Rimbaud sent him several pages of poems, including his The Sleeper in the Valley. Verlaine was intrigued by Rimbaud’s work and sent him a one-way ticket to Paris. He arrived in Paris in 1871 and lived with Verlaine for a short time. Rimbaud and Verlaine led a wild social life, spiced with absinthe and hashish. Their behavior was scandalous for the society of the time. They eventually came to London, and Verlaine abandoned his wife and son. In England the two lived in poverty, earning mostly from teaching, and the relationship between two became increasingly bitter.

In 1873, Verlaine returned to Paris alone but regretted leaving Rimbaud. He asked Rimbaud to come to Brussels, but their reunion went badly. On one occasion, Verlaine was drinking and argued with Rimbaud, which ended with Verlaine shooting the 18-year-old in the writs. After this, Rimbaud ran off, and Verlaine was arrested and charged with attempted murder. Eventually, Rimbaud withdrew his charges, but Verlaine was sentenced to two years in prison for wounding with a firearm. Rimbaud returned to Charleville and completed his prose work A Season in Hell- pioneer work of modern Symbolist writing.

In 1874, Arthur Rimbaud went to London with the poet Germain Nouveau, with whom he lived together for three months. During this time he put together his work Illuminations. The following year, Rimbaud met once again with Verlaine, but then began to travel Europe, mostly on foot. In 1876, he enlisted in the Dutch Colonial Army and got free passage to Java in the Dutch East Indies. He deserted after three months and fled into the jungle. He then returned to France and in 1878, traveled to Larnaca, Cyprus. There he worked in construction but had to leave the following year, since he contracted a fever. In France, he was diagnosed with typhoid.

In 1880, Arthur Rimbaud settled in Aden, Yemen and was an employee in the Bardey agency. In 1884, he published his Report on the Ogaden at the Societe de Geographie in Paris. He left his job at Bardey’s the same year and became a merchant in Harar, Ethiopia. He dealt with firearms and coffee. At the time he was a close friend of the Governor of Harar, Ras Makonnen Wolde Mikael, who later became the Emperor Haile Selassie.

In 1891, Arthur Rimbaud developed what was initially thought to be arthritis in his right knee. He was not responding to the treatment and prepared to return from Aden to France for treatment. He consulted with a British doctor, who diagnosed him with tubercular synovitis and recommended amputation of his leg. He arrived in Marseille and was admitted to the Hospital de la Conception. There, his leg was amputated, and it turned out he had bone cancer.

Arthur Rimbaud stayed at the family farm in Roche and attempted to travel back to Africa, but his health quickly deteriorated. He was admitted to the hospital in Marseille, where he died on November 10, 1891, being 37 years old.

Rimbaud’s poetry and his life made a great influence on many of the 20th-century writers, musicians and artists. His life has been portrayed in several films. He is also the protagonist of the 1978 opera Rimbaud, ou le fils du.

In 2012, John Zorn released CD titled Rimbaud, featuring compositions inspired by Arthur Rimbaud’s life. His name was also featured in the 1981 Brazilian film Eu TeAmo, where the main character-a young woman with a degree in art history, tells her lover that Arthur Rimbaud was “a fag who threw shit on the wall and wrote poetry.”