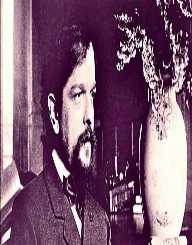 Claude Debussy was remarkably known as a French Composer as well as one of the leading figures in the domain of impressionist music. He is known for his marvelouscontributionto the world of mucic. In fact, he won the status of Chevalier of the Legion of Honour in 1903.

One thing about him is that he always dramatically disregard the traditional chord of structures and tonality and pioneered in the penetration of it into the Western Modern Music era. Debussy’s works are the expression of his turbulent happenings in his lifetime. Ranging from his early childhood with his unsuccessful affairs with women he had kept. His greatest works are revolutionary and include Pelleas et Melisande among others. His works have some influence on most composers of the 20th century.

Claude Debussy was born on the 22nd of August 1862 to Manuel-Achille Debussy and Victorine Manoury Debussy. He was the eldest of the five children his parents had. His father is a shop owner who specialized in the sale of china and crockery. His mother, on its own, is a seamstress. His concern most of the time is always on music being the fact that he had discerned his talents from childhood. He took Piano lessons at a very tender age of seven from Cerruti. Claude Debussy joined the Paris Conservatoire to learn music and which he learned for eleven years. He got involved in music and met many people in his life. He studied Ernest Guiraud’s composition coupled with the Harmony of Emile Durand as well as the history of music of Louis Albert.

His career was started in 1880 when Claude Debussy met Nadezhda Von Meck hired him to teach her children Piano. He traveled to Europe with her and the children. Thus, he began accumulating his musical and cultural Russian experiences into what would later become his new composition. As at then, his work was influenced by the works of the Russian composers he studied.

At the age of 22, he entered a competition with L’Enfant Prodigue (The Prodigal Child) in the Prix de Rome. This competition was meant for the composers. Surprisingly, he catered the top prize. He was afforded a chance to study for three years in the Italian Capital. He studied the German music Composer, Richard Wagner when he was there. This work influenced his profound and lasting and shied away from any form of ostentation associated with Wagner. He left after staying for two years.

Claude Debussy attended Paris World Exposition in 2889 after he had returned to Paris for two years. He heard a Javanese Gamelan – a musical ensemble that is composed of a variety of gongs, metallophones, and xylophones. A few years later, Debussy incorporates these elements in his style, and a new style was created.

At this period, he wrote some set of masterpieces which earned him a lot of accolades. Claude Debussy composed Ariettes Oubliees, Prelude a l’apres-midi d’unfaune and the String Quartet. He completed a seminal opera Pelleas et Melisande was completed in 1895. When performed, it has a dividing effect on the listeners.

Some loved it while some hated it. However, he gained a lot of success and recognition with this opera. For some ten years later, he became one of the leading figures in the French Music. Claude Debussy wrote a lot of works for both orchestra and solo piano. In 1905, he published his work Suite Bergamasque. This work was best known and comprises of four parts which are – Prelude, Menuet, Clair de Lune (this is known by many) and Passepied.

Claude Debussy died of colon cancer on the 25th day of March 1918 at age 55. He was known to have spent the reaming years of his life on critics and performance of his works internationally as well as composing. He is known as a legend in the music world today for his unique structured composition. He still lived on to inspire people around.

His life was chaotic and filled with some long unsuccessful love affairs. Claude Debussy once had a broken marriage before settling down for a married woman. It was known that at the age of 18, he had his eight-year affair broken. He also had a passionate nine-year relationship which lasted not forever. He got engaged to Therese Roger for a short time and still got sun.

Claude Debussy later got married to Rosalie who was a fashion model in 1899, but this relationship was hell. He divorced her in 1905. He married Emma whom he ran to England with to avoid backlash. This marriage survived, and a child was the reward of the marriage. The marriage took place in 1908. The marriage succinct till his death in 1918.