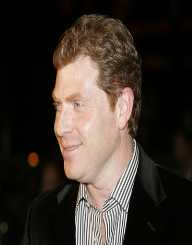 Bobby Flay is an American reality television personality, restaurateur, and celebrity chef. Born on December 10, 1964, he owns several restaurants including Bar Americain in New York and at Mohegan Sun, Bobby’s Burger Palace in 19 locations across 11 states in the U.S., Mesa Grill in Las Vegas and the Bahamas and Bobby Flay Steak in Atlantic City. Others include Uncasville, Connecticut, and Gato in New York. As a television personality, he has hosted and appeared in many Food Network television programs including Hot Off the Grill with Bobby Flay, Food Nation, Bobby Flay's BBQ Addiction, The Best Thing I Ever Ate and Brunch @ Bobby’s among others.

Bobby Flay was born on December 10, 1964, in New York to Bill and Dorothy Flay. He grew up in Upper East Side of Manhattan. Raised as in a Catholic home, he received education at denominational schools in his neighborhood. At the age of 17, Flay dropped out of high school to venture into the restaurant industry. He later continued his education at the French Culinary Institute with tuition paid by Joe Allen, the proprietor of Joe Allen Restaurant. Flay worked with the restaurant, and Allenwas impressed withhis natural talent. He graduated with a degree in culinary arts in 1984.

Dropping out of high school, Bobby Flay picked a job at a pizza parlor and later at Baskin-Robins. Working there for a while, he was employed as salad maker at Joe Allen Restaurant in Manhattan. His father was a partner at the restaurant. This was when Allen sponsored Flay to enroll at the French Culinary Institute. After graduating, he worked as a sous-chef. Flay was offered a job as executive chef at the Brighton Grill in Third Avenue but left the position later as he was not ready to run a kitchen. His next job was as a chef working for restaurateur Jonathan Waxman who introduced him to southwestern and Cajun cuisine. These cuisines would later become his signature dishes. From 1988 to 1990 he worked as the executive chef at Miracle Grill. He worked and later became a partner of restaurateur Jerome Kretchmer at Mesa Grill.

The partners opened Bolo Bar & Restaurant in the Flatiron District, New York City in 1993. In 2004, Flay opened another Mesa Grill at Caesars Palace in Las Vegas and the following year opened Bar Americain in Midtown Manhattan. He opened several other branches of Mesa Grill in several other locations. Bobby Flay also started the Bobby's Burger Palace (BBP) with the first branch opened on July 15, 2008, in Lake Grove, Long Island. He has since opened several others in different locations totaling nineteen locations in eleven states and the District of Columbia.

Flay was also a master instructor and visiting chef at the French Culinary Institute.

He made a cameo appearance in the Disney movie, Eddie’s Million Dollar Cook-Off and the episode Design of Law & Order: Special Victim Unit in 2005. He was the host of a weekly call-in show on Sirius XM Satellite Radio.

Bobby Flay was married In 1991, Bobby Flay married a chef Debra Ponzek. After two years of marriage, the couple divorced. He then married his second wife Kate Connelly in 1995. They have a daughter, Sophie. They divorced in 1998. In 2005, Bobby Flay married his third wife actressStephanie March. There are media reports that the couple separated in March 2015 and finally divorced in July 2015. Bobby Flay has since February 2016, been dating Helene York.in 2003; he instituted the Bobby Flay Scholarship at the French Culinary Institute to be awarded to a student in the Long Island City Culinary Arts Program.