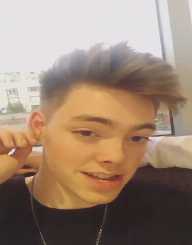 Zach Herron has been singing for years in school choirs. He participated in talent shows at school and has had great feedback from them. This likely inspired him to show his abilities on social media websites like Twitter, Instagram, and YouTube.

Zach Herron had been singing for years before he began working on his YouTube channel. He mostly posted videos of himself doing cover songs from other famous musicians. He posted his debut single on the site, called Timelapse at the beginning of 2016. The song took off right away, and Zach made his way into the hearts of his fans (mostly young teenage and preteen girls) almost overnight.

Later in January, he also posted a cover of a song online called Stitches. Within a week of the post, this video got over 10 million views, and over 150,000 people shared the video online.  He released his second single in May 2016 titled Why.

Herron’s online fame brought him real-life opportunities. He played a few gigs around his hometown, as well as doing a small local tour. This helped to bring in more fans. The young star loved this because he wanted to experience. Playing live enabled him to get just that.

Later in the same year, 2016, Zach Herron decided that he wanted a more serious commitment to music. So he formed his boy band called Why Don’t We with his friends Jonah Marais, Corbyn Besson, Daniel Seavey, and Jack Avery. The band claims to get along well, and Zach thinks that being in a boy band is the right move to start off his music career. The band already has two hit tracks, which they have posted online, called Taking You and Nobody Gotta Know. The band began a short tour near the end of 2016.

Some say that this young boy sounds similar to Justin Beiber, but he is not trying to copy the star in any way. He wants to be his person. He tries to make his music unique by writing all of his lyrics. He also knows how to play guitar, a skill he shows off in his videos and lives on stage.

Zach Herron was selected to be a member of the Septien Entertainment Group’s Master Select Program. This programme is set up to help young singers and other entertainers to develop their talent. He is one of the most budding singers ever to have this honor.

Zach Herron may as well be a social media mogul. With every new social media site, he signs up for he gets hundreds of thousands of followers. At first, his social media presence was small, like it is for most young teenagers. His social media presence began to grow when he put up his work. And it only got larger once he joined a boy band. Currently, he has accounts on Facebook, Twitter, and Instagram, where his friends can find pictures and videos of himself and his band.