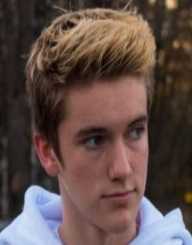 Nick Horton was born on July 24, 1999, in Columbus, Ohio, United States. There he spent the most of his childhood and continued to live there. Horton is currently attending school in Columbus. He is currently single.

Nick Horton began his rise to stardom in 2015, when he joined several social media sites. He created a profile on YouNow and musical.ly. He began posting videos, and they soon became viral. Since then, he has gained more than 700 thousand followers on musical.ly and 347 thousand followers on YouNow. He also has popular Twitter and Instagram accounts.

Horton used to have an account on social media application Vine, where he posted videos of himself making different humorous facial expressions. On Vine, he had more than 400 followers.

Horton is known for his great looks, excellent sense of humor and charming personality. In his videos, Horton often creates humorous situations. He continues to post new videos and photos to keep his fans interested.

Despite his popularity on social media sites, not much is known about Horton’s personal life. Horton often hosts his friends on his videos.