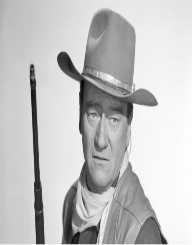 Marino Robert Morrison was born on May 26, 1907, in Winterset, Iowa, USA. The star later went by the stage name, John Wayne, which is the name he became famous for. However, he never legally changed his name. His parents were Mary (Brown) and Clyde Morrison.

As a teenager, John Wayne lived an average life. He had an after school job working in an ice cream shop, he played football at the Glendale High School and the University of Southern California and lived an all-American life. However, he had to leave college after he was injured, and could no longer use his football scholarship. It was after leaving college that John Wayne began to focus on acting.

John Wayne, nicknamed “The Duke” was known for his wonderful acting skills. He usually played a hero with a heart of gold, but with an outer skin so thick that hardly anyone was lucky enough to see it. John Wayne acted mostly in western movies, as well as some action films. Many of his characters seemed to be the same, which made fans see the actor as though he was like the characters he portrayed on-screen.

John Wayne first started acting (mostly as extras) in the late 1920’s. It wasn’t until 1930 that he finally earned a lead role in the film, The Big Trial. However, the movie did not go well, and he was forced to take on bit parts for a while. It wasn’t until 1939 when he got another chance to have a lead role in the film, Stagecoach. This movie was a success, and it paved the way for the rest of his acting career.

John Wayne took a short break from acting in films when World War II broke out. He tried to join the army, but he was not accepted. Instead, he toured to several army bases to entertain the troops. Only when the war was over did he get back into films.

After World War II, John Wayne expanded on his career. He still worked in westerns and action films, but he started to learn more about directing instead of just acting. In the later 1940’s, he began to work with the famous director, John Ford. The duo worked on several movies together, including Fort Apache, The Searches, and the Rio Grande. In 1960, John Wayne used what he had learned from John Ford to star in and direct his own film, The Alamo.

During his career, John Wayne acted in almost 200 films. Some of his most famous movies are listed below.

Throughout his long acting career, John Wayne won 25 awards and was nominated for almost 20 others. Some of this most prestigious acting awards are listed below.

Oscar for Best Actor in a Leading Role (True Grit)

In 1960, John Wayne earned a star on the Hollywood Walk of Fame.

John Wayne was awarded a congressional gold medal in 1979, but it was not given to his family until 1980, a few months after his death.

John Wayne had stomach cancer in the 1970’s. This cancer later caused his death on June 11, 1979. He died in Los Angeles, California. He was 72 years old when he died.

John Wayne’s children worked together to set up the John Wayne Cancer Foundation in 1985. The foundation was made to help other people who had cancer like their father had.

Commemorative (and highly collectible) stamps of the actor were made in both the 1990’s and early 2000’s.

John Wayne was inducted into the California Hall of Fame after his death, in 2007.