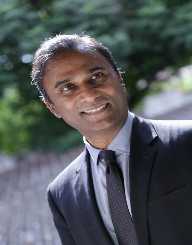 Shiva Ayyadurai was born in Mumbai, India on the 2nd December 1963. He has one sibling, a sister, Uma Dhanabalan. The family moved to the United States when their children were young.

As a fourteen-year-old, Shiva Ayyadurai wrote a computer program; he named it Email. He filed a copyright application in 1982.

Shiva Ayyadurai continues his work as an inventor across a wide range of disciplines and interests. After his email invention, he established the first portal for artists, Arts Online (1993). CytoSolve (2007) a company working on drug development for multiple diseases as well as working on measuring the effectiveness of health supplements.

Shiva Ayyadurai was responsible for creating the course Systems Visualization at MIT, which is one of their most popular courses. He created Systems Health to educate and provide awareness between medical doctors and holistic practitioners working in both eastern and western disciplines.

Shiva Ayyadurai started Innovation Corps and in India, the country of his birth, he financed Tamil Nadu for a way of featuring the arts and culture of Tamil Nadu. He is also the inventor of Echomail.

Shiva Ayyadurai created the email as a fourteen-year-old in 1978, although this is disputed by some and is a controversial issue in some circles.

Shiva Ayyadurai was in a relationship with actress Fran Drescher between 2014 and 2016. They had a marriage ceremony but later parted ways. He has a Twitter account @va_shiva which has over 26K followers.

Some say that the late Ray Tomlinson is credited as the inventor of email when he worked ARPANET in 1971. Shiva Ayyadurai claims that he invented email in its current form in 1978. Ayyadurai says that Tomlinson’s creation was a rudimentary system to send texts whereas he is the one who built what is used today.