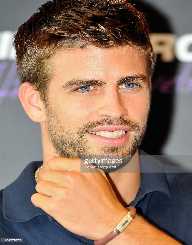 Spanish footballer Gerald Pique was born on the 2 February 1987 in Barcelona, Spain. Pique’s father Joan is a businessman, and his mother Montserrat Bernabeu is a director of a hospital in Barcelona. He has a brother Marc and his grandfather Amador Bernabeu is a former vice-president of Barcelona.

Starting out his career in FB Barcelona’s youth team, Gerald Pique played as a defensive midfielder. He joined Manchester United even before he had signed a professional contract with FC Barcelona. In 2004, he played his first match for Manchester United. Playing center back at Crewe Alexandra, it was a 3-0 League Cup victory. His next outing for the club was in March 2006: Manchester United vs. West Ham United in a Premier League match at Old Trafford. Pique played right back. Gerald Pique played well and was offered a new four-year contract, 2005-2009. In August 2006, La Liga side Real Zaragoza loaned Pique for the season. In 2007, he returned to Old Trafford, making nine more league appearances during the 2007-2008 season.

Gerald Pique signed a four-year contract with Barcelona in May 2008. Barcelona paid five million pounds. He was happy to be back at Barcelona; but at the same time, said that he respected Manchester United and had enjoyed his time with the club.

In November 2008, Gerald Pique scored his first goal for Barcelone. It took place at the 2-5 Champion League group stage win. His primary domestic goal, in a Copa del Rey vs. Espanyol game, was on 29 January 2009. Barcelona won the game 3-2. Then in May 2009, Pique scored a goal in a 2-6 El Clasico victory against Real Madrid at the Santiago Bernabeu. Barcelona had a 4-1 win over Athletic Bilbao in the Copa del Rey final, and Barcelona won the league title after Real Madrid’s loss to Villarreal.

Pique played against Manchester United on the 27 May 2009 in the Champions League Final. Barcelona won 2-0. In December, Barcelona beat Estudiantes (Argentina) 2-1 in the 2009 FIFA World Cup Final. Pique was instrumental in helping Pedro score in the 89th minute's equalizing goal, taking the match into extra time.

In February 2010, Barcelona extended Pique’s contract until 2015. And on 28 April in Barcelona’s Champions League semi-final, he scored in the second leg against Internazionale. Barcelona subsequently went through on a 3-2 aggregate. On the 28 May 2011, Gerald Pique played his second Champions League Final. Barcelona vs. Manchester United at Wembley Stadium, with Barcelona winning 3-1.

In May 2014, Barcelona offered to extend Pique’s contract until 2019, and he accepted.

During 2015 Barcelona won its fifth European Cup when they beat Juventus at the Olympiastadion in Berlin. Barcelona became the first club to win the treble domestic league, domestic cup, and European Cup twice.

In 2016, Pique scored his fifth goal for Spain at the UEFA Euro 2016 competition; in the opening game against the Czech Republic. Spain won 1-0.

Gerald Pique’s partner is Shakira, a Colombian singer. They have two children: Milan and Sasha.