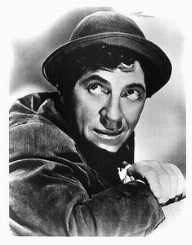 Chico Marx was born on the 22nd March 1887, to Sam and Minni Schoenberg Marx. He was born in Manhattan, New York, in the United States.

Chico Marx was one of five boys. His brothers were named Harpo, Groucho, Gummo and Zeppo.

As a talented musician, Chico Marx started a musical group with his brothers performing in vaudeville, but it wasn’t long before they recognized their talent for comedy. Chico Marx became known as Chico rather than Leonard. As part of their comedy, Chico Marx developed an Italian character, complete with wig, cap and Italian accent. From vaudeville, they moved on to Broadway and radio.

As their success grew, the brothers decided to take the plunge into acting and make a movie. Their first film was The Cocoanuts (1929), followed by Animal Crackers (1930) and Monkey Business (1931). They signed with Paramount Pictures, but after several years and a declining career, they used a family connection to sign with MGM.

Chico Marx was a savvy businessman, and after the death of their mother, he took over the management of the group.

In the 1930s and 1940s, Chico Marx led the Chico Marx Orchestra. In 1946, the brothers reunited for one last film to help Chico Marx get back on his feet financially. The movie was called, A Night in Casablanca, and was so successful; Chico Marx earned enough to live on for the rest of his life. His brothers took control of the finances though and paid him a monthly allowance so that he wouldn’t squander it all on his gambling.

The Marx Brothers starred in 16 movies, and three musicals.

Chico Marx became known as a womanizer and gambler. He had a gambling habit his whole life, and long after his brothers had all retired, Chico Marx still worked to try and pay off his debts from all the gambling.

He loved card games, horse, and dog racing, and sports betting. Chico Marx suggested he lost millions of dollars over the years with his gambling.

In 1917, Chico Marx married Betty Karp. They had a daughter, Maxine. The couple divorced in 1940 after Karp was unable to continue living with Marx’s womanizing.

His second marriage was in 1958, to Mary De Vithas. It was only three years later that he died.