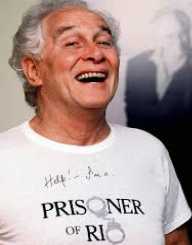 Ronnie Biggs enlisted in the Royal Air Force in 1947, but he was dishonorably discharged two years later as a deserter. Biggs then turned to crime and over the next few years he was sent to prison twice, and while in prison, he met Bruce Reynolds.

In 1963, Ronnie Biggs was doing work for a train driver who was near retiring, and he mentioned to Biggs about robbing the mail train. Biggs and Reynolds, along with 13 others, organized the robbery for 8th August.

Ronnie Biggs left the farm a few days later and went home with his share. One of the team was supposed to burn Leatherslade Farm to get rid of the evidence they had left behind, but he failed to do it. Biggs had left fingerprints at the farm, and he was arrested three weeks later by investigators, as were 11 of his accomplices.

In 1964, nine of the men were sent to jail, including Biggs. The prison terms were mostly for 30 years each.

Prison Escape and Life on the Run

After just over a year in prison, Ronnie Biggs escaped. He sailed to Brussels and organized for his wife to meet up with him in Paris. He had new identity papers, and he also had plastic surgery to change his appearance.

In 1966, Biggs and his family landed in Sydney, Australia. They settled in South Australia and had very little left of the robbery proceeds. They had spent all but about seven thousand pounds.

The following year, Biggs received a tip that Interpol was on to him in Australia and he needed to move. In May 1967, they moved to Melbourne. Biggs lived separately to his family in a neighboring suburb.

By October, it was reported on the news that Ronnie Biggs was in Melbourne, and the authorities were getting closer to capturing him. He fled immediately by ship from Melbourne, and three weeks later landed in Panama. Biggs then flew to Brazil.

His family stayed behind in Melbourne. In 1974, after the news of Ronnie Biggs having a child to a Brazilian woman, his wife agreed to a divorce which finalized in 1976.

The media were soon on to Biggs being in Brazil, but as his girlfriend was a Brazilian national, and pregnant, Biggs could not be extradited to the UK.

Due to him being a wanted criminal, Biggs wasn’t allowed to work. He came up with the ingenious idea of hosting barbecues at his house, where people paid to go and eat and be entertained by Biggs recounting the story of The Great Train Robbery.

In 1997, the UK came to a deal with Brazil for an extradition treaty. They submitted a formal application for his return, which Biggs agreed to. The Brazilian Supreme Court rejected the appeal, so Biggs could have stayed in Brazil for the rest of his life if he had wanted to. Biggs returned to the UK in May 2001 and was arrested and sent back to prison straight away.

Ronnie Biggs applied several times for an early release because of his poor health, but each petition was denied. Biggs’s health continued to decline, until finally in 2009 after he had several strokes, he was finally released on compassionate grounds.

Once out of prison, Ronnie Biggs' health did improve slightly, but he was readmitted to hospital in May 2010. In February 2011 he had another stroke. In November 2011, Biggs released his autobiography, Ronnie Biggs: Odd Man Out – The Last Straw. By this stage, he couldn’t talk. Biggs died on 18th December 2013. He was 84 years of age.

In 1960, Ronnie Biggs married Charmian Powell. The couple had three sons, but they divorced in 1976. Biggs was married in 2002 to Raimunda de Castro, and they were still married at the time of his death in 2013.