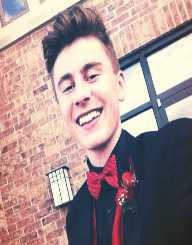 Rudan Custodio was born on January 4. 1994 in Virginia Beach, Virginia. He was born into an Asian family. He has one sibling by the name Rhoda. He is an American YouTube and You Now star. He is a tremendous social media personality who has made a name for himself. He is also a singer and a dancer. He is a co-founder of the group ‘5Quad’ which is a group comprised of You Tubers. He loves broadcasting on You Now about what happens in his daily life. On YouTube, he posts vlogs, challenge videos with his friends and dance routines among other videos. He has been nominated for the 7th and 8th Shorty Awards for his social media presence.

Rudan Custodio joined YouTube in 2007 and created a YouTube channel known as ‘RudanC’ where he started posting videos. In 2009, he joined Twitter hence making his presence known to a lot of his fans. In 2013, he created another YouTube channel titled ‘TheRuduLife’ where he posts behind the scenes videos. He is however much popular on You Now where he posts live broadcasting videos. He joined You Now while he was in college where he was pursuing a course in engineering. He captured the attention of many viewers by his comical videos.

Rudan Custodio decided to drop out of college and pursue a social media career. So far he has released two singles titled ‘Keep Your Head Up’ and ‘Summer VacAye’ which are available and can be bought at iTunes. He also founded ‘5Quad’ with his fellow You Nowers Nick Bean, Zach Clayton, Edwin Burgos and Timmy Conners with whom they dominated You Now and they became very famous and popular stars. Rudan acted as the spokesperson for the group.  They released their first EP ‘TRENZ’ and toured on the DigiTour’s SlayBells Ice Tour in 2015.

In 2016, they went out on their own tour as part of the ‘Lights Global’ group. They however separated later on to pursue individual careers. Rudan’s two videos ‘Harlem’ and ‘Finding Alex from the Target’ became very popular with his fan base and they were viewed a number of times.

Rudan Custodio is a prominent social media personality who had significantly made a name for himself. He is a trained dancer as he started taking dancing lessons from a very young age. He took ballet dance lessons among other dancing classes. He loves posting videos of him dancing on YouTube and this had drawn a lot of fans towards him. He is also a good singer, and he is widely known for his rapping abilities and his skill to improvise every song that he sings. He is hardworking, focussed and determined young man.

Rudan Custodio loves music that he has released two singles ‘Keep Your Head Up’ and ‘Summer VacAye’ which were received well by his fans and the general public as a whole. He became popular, and the decision to communicate with other social media personalities to come up with a group and that is how ‘5Quad’ was formed. The group came together and did some great stuff before they split up to pursue individual careers.

Rudan Custodio started dating fellow You Now star Maddie Welborn in 2015. The couple was given the nickname ‘Raddie’ because they loved making video broadcasts together. They also appeared on each other’s YouTube Channel. The relationship however ended when Maddie’s father could not approve of the relationship. Maddie’s father ordered Rudan to stop communicating with Maddie or else he would involve the police in the matter. Rudan broke up with Maddie but he was so heartbroken but eventually, he healed, and now they are friends with Maddie. Rudan loves his family and friends. Most of the time his family and his sibling Rhoda appear in his live broadcasts.