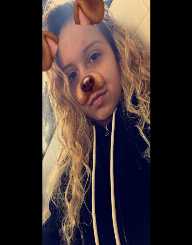 Liddlenique was born on March 5, 2001, in the United States. Not much is known about her own life since the young social media star tries to keep her private life away from the social media. She and her cousin, also a social media star drippyeli have collaborated on several duets. Liddlenique is dating a fellow star AyooKhaos.

Liddlenique started out her social media career when she was 15 years old. She began posting videos on the popular application musical.ly. Liddlenique quickly gained recognition and a huge fan base. By April 2016, she already had 30,000 fans on musical.ly.

The young and charming girl continued to gain recognition when she joined Instagram. There she quickly acquired as much as 800,000 followers. Her good looks and charming personality make her a promising young star.
She currently attends school and enjoys dancing. She is also interested in fashion and has become a style icon amongst her fans.