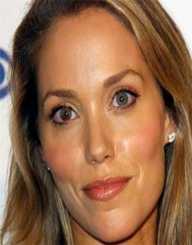 American actress Elizabeth Berkley was born on the 28 July 1972 in Farmington Hills, Michigan to Fred and Jere Berkley. She has one sibling, a brother Jason. When she was a child, she had ballet lessons at the Detroit Dance Company.

Elizabeth Berkley took part in various dance productions as a young girl. In 1987, she made her screen debut in the television film Frog. She continued getting small roles on television. At the same time as pursuing her acting career, Berkley was also a teenage model with Elite Modelling.

The Ask-Elizabeth online self-help programme for young girls was founded by Berkley in 2006. In 2011, Berkley published Ask Elizabeth: Real Answers to Everything You Secretly Wanted to Ask About Love, Friends, Your Body...and Life in General.

Elizabeth Berkley is an animal rights activist and vegetarian.

Elizabeth Berkley married Greg Lauren in November 2003, and they have one child, a son Sky Cole (b.2012).