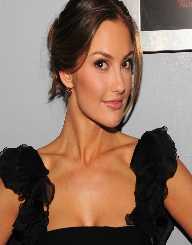 As a teenager, Minka Kelly attended Valley High School. After high school, she briefly attended college to study medicine, but she dropped out before she could earn a degree.

Minka Kelly first began her official acting career in 2004 in the show Cracking Up. She only had a small role in the show, but this role helped to begin her acting career. In the same year, she also had a small role on the Nickelodeon show, Drake & Josh. In 2005, she continued to act in small roles in the television shows and films like American Dreams and Devil’s Highway. It was also in this year that she played the recurring character, Ricki in What I Like About You.

It was in 2006 that Minka Kelly got her most recognizable role as Lyla Garrity on the television show, Friday Night Lights. While working on this show, Kelly also continued to take on small roles in television shows and films. These included works like The Pumpkin Carver, The Kingdom, Body Politic, and Tit for Tat. Kelly continued to work on Friday Night Lights until 2009.

In 2010, Minka Kelly took on another recurring role on the television show Parenthood, as Gaby, a behavioral aide. At the same time, she was also working on the made-for-television movie, True Love, the film The Roommate, and Just Go With It. Her role on Parenthood ended in 2011. With the end of this show, only created the beginning of another, Charlie’s Angels. She worked on this show throughout 2011.

It wasn’t until 2013 that she got her next recurring television role, this time on Almost Human, as Detective Valerie Stahl. Minka Kelly acted on this show until 2014. Also in 2013, she was involved with the show Full Circle. She also played Jackie Kennedy in the film Lee Daniels’: The Butler.

In 2015, She appeared in several television and film projects, including Away and Back, Man Seeking Woman, and Papa Hemingway in Cuba. In 2016, he has a short stint on the show The Path, followed by another short recurring role on Jane the Virgin in 2017. Other recent projects she has worked on include Bull and Naked.

Minka Kelly is currently working on filming several projects including Titans (the television show) and The Beach House, a made-for-television show. These projects are predicted to come out in 2018.

Since Minka Kelly’s Hollywood career is so new, she has yet to win any awards. However, she has been nominated for several awards. Her most impressive nominations are listed below.

Minka Kelly has yet to be married, but she has had her fair share of celebrity romances. In the early 2000’s, she dated Donald Faison and Chris Evans. She also dated the musician John Mayer. She has also dated the baseball player, Derek Jeter before dating another actor, Wilmer Valderrama. Most recently, Minka Kelly began dating Jesse Williams in July 2017.