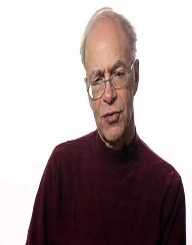 Peter Singer is a moral philosopher out of Australia.  Peter Singer has challenged the traditional ideas of ethics and stands for animal rights.

Peter Singer was born on July 6, 1946, in Melbourne, Australia.  His parents were Jewish immigrants from Vienna, Austria.  His father was a tea exporter while his mother was a doctor.

They left their homeland after Austria was annexed by Nazi Germany in 1938.  His grandparents died in concentration camps.

Peter Singer attended Preshil School and Scotch College near Melbourne for his primary and secondary education.  Singer is a 1967 graduate of the University of Melbourne.  During that time, he studied law, history, and philosophy.

Peter Singer returned to the university to complete his Master of Arts degree in 1969.  With a scholarship, Peter Singer attended the University of Oxford.  In 1971 Peter Singer earned his Bachelor of Philosophy postgraduate degree from the school.

His thesis later became a published book in 1973 titled Democracy and Disobedience.

Peter Singer's career is full of published works and years as a lecturer or professor in the universities.  Throughout his work, Peter Singer has questioned the traditional ideas of ethics while laying out the groundwork for applied ethical behavior.

Topics he has focused on have included animal rights, poverty, and global health.

The same year that Peter Singer earned his degree at Oxford, he published his article titled “Famine, Affluence, and Morality.”  It discussed the importance of charities that aid those who are dying due to famine.

His book Democracy and Disobedience was his first book in 1973 and was followed by Animal Liberation.  Peter Singer introduces the term “speciesism,” or the discrimination based on species.  In the, he discusses how humans assume superiority over animals to justify exploitation or mistreatment. Peter Singer also supports the vegan or vegetarian lifestyle.  In that same decade, he published books and anthologies including Animal Rights and Human Obligations and Practical Ethics.

During the 1970s, Peter Singer lectured and held visiting professorships at universities including the University of Chicago, Oxford University, and New York University.  In 1977, Peter Singer was the chair of philosophy at Monash University.

At the same institution, he was the first director of the Center for Human Bioethics.  Peter Singer stayed in Melbourne for the majority of his career. In the early to mid 1980s, Peter Singer's work turned to focus on infant and children.  Such work, which turned to be controversial to many, including Test-Tube Babies: a guide to moral questions, present techniques, and future possibilities and Should the Baby Live?: The Problem with Handicapped Infants.  Many people were concerned how Peter Singer would focus on the rights of animals but not have the same interests in disability rights.  Later books addressed similar issues on the rights of others.

Titles included Ethical and Legal Issues in Guardianship Options for Intellectually Disadvantaged People, Save the Animals!, and The Great Ape Project:  Equality Beyond Humanity.

Peter Singer ran for the Australian Senate in 1996 at the same time he co-authored the book The Greens with Bob Brown.  He also lost that election. Princeton University appointed him the Professor of Bioethics at the University Center for Human Value in 1999.  Peter Singer continues to lecture there as well as The New College of the Humanities in London as of 2011. Peter Singer was one of the philosophers who was featured in the film and book titled Examined Life:  Excursions with Contemporary Thinkers in 2008.

Peter Singer published another book about getting rid of poverty altogether in 2009 titled The Life You Can Save:  Acting Now to End World Poverty.

Peter Singer is one of the more widely known contemporary philosophers of his time.  He has published more than 16 books on his own and collaborated with others on dozens more.  His interests are primarily on ethics and bioethics. Peter Singer has been outspoken on topics such as effective altruism, world poverty, animal liberation and veganism.

Peter Singer's views and teachings about certain topics has been topics of protests around the world.  This includes topics on right to life and disability rights.  Some have criticized that Singer's speciesism is the same as sexism or racism.

There have been protests at many of his lectures.  In some cases, his lectures have been canceled.  When Singer was assigned to be a professor at Princeton University in 1999, American publisher and philanthropist Steve Forbes stopped donating to the school in protest.